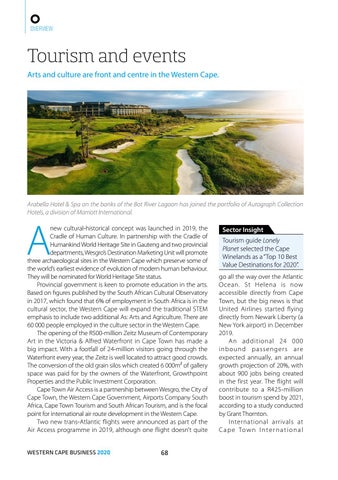 Tourism and events Arts and culture are front and centre in the Western Cape.

Arabella Hotel & Spa on the banks of the Bot River Lagoon has joined the portfolio of Autograph Collection Hotels, a division of Marriott International.

new cultural-historical concept was launched in 2019, the Cradle of Human Culture. In partnership with the Cradle of Humankind World Heritage Site in Gauteng and two provincial departments, Wesgro’s Destination Marketing Unit will promote three archaeological sites in the Western Cape which preserve some of the world’s earliest evidence of evolution of modern human behaviour. They will be nominated for World Heritage Site status. Provincial government is keen to promote education in the arts. Based on figures published by the South African Cultural Observatory in 2017, which found that 6% of employment in South Africa is in the cultural sector, the Western Cape will expand the traditional STEM emphasis to include two additional As: Arts and Agriculture. There are 60 000 people employed in the culture sector in the Western Cape. The opening of the R500-million Zeitz Museum of Contemporary Art in the Victoria & Alfred Waterfront in Cape Town has made a big impact. With a footfall of 24-million visitors going through the Waterfront every year, the Zeitz is well located to attract good crowds. The conversion of the old grain silos which created 6 000m² of gallery space was paid for by the owners of the Waterfront, Growthpoint Properties and the Public Investment Corporation. Cape Town Air Access is a partnership between Wesgro, the City of Cape Town, the Western Cape Government, Airports Company South Africa, Cape Town Tourism and South African Tourism, and is the focal point for international air route development in the Western Cape. Two new trans-Atlantic flights were announced as part of the Air Access programme in 2019, although one flight doesn’t quite

Sector Insight Tourism guide Lonely Planet selected the Cape Winelands as a “Top 10 Best Value Destinations for 2020”. go all the way over the Atlantic Ocean. St Helena is now accessible directly from Cape Town, but the big news is that United Airlines started flying directly from Newark Liberty (a New York airport) in December 2019. An additional 24 000 inbound passengers are expected annually, an annual growth projection of 20%, with about 900 jobs being created in the first year. The flight will contribute to a R425-million boost in tourism spend by 2021, according to a study conducted by Grant Thornton. International arrivals at C a p e To w n I n t e r n a t i o n a l