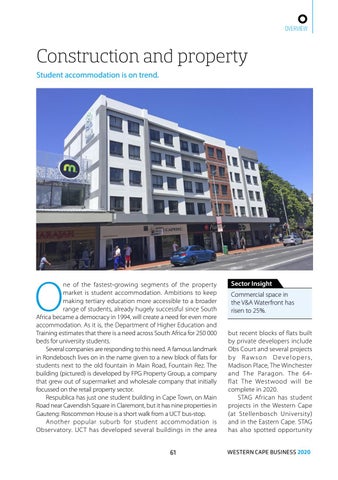 Construction and property Student accommodation is on trend.

ne of the fastest-growing segments of the property market is student accommodation. Ambitions to keep making tertiary education more accessible to a broader range of students, already hugely successful since South Africa became a democracy in 1994, will create a need for even more accommodation. As it is, the Department of Higher Education and Training estimates that there is a need across South Africa for 250 000 beds for university students. Several companies are responding to this need. A famous landmark in Rondebosch lives on in the name given to a new block of flats for students next to the old fountain in Main Road, Fountain Rez. The building (pictured) is developed by FPG Property Group, a company that grew out of supermarket and wholesale company that initially focussed on the retail property sector. Respublica has just one student building in Cape Town, on Main Road near Cavendish Square in Claremont, but it has nine properties in Gauteng: Roscommon House is a short walk from a UCT bus-stop. Another popular suburb for student accommodation is Observatory. UCT has developed several buildings in the area

Sector Insight Commercial space in the V&A Waterfront has risen to 25%. but recent blocks of flats built by private developers include Obs Court and several projects by Rawson Developers, Madison Place, The Winchester and The Paragon. The 64flat The Westwood will be complete in 2020. STAG African has student projects in the Western Cape (at Stellenbosch University) and in the Eastern Cape. STAG has also spotted opportunity WESTERN CAPE BUSINESS 2020