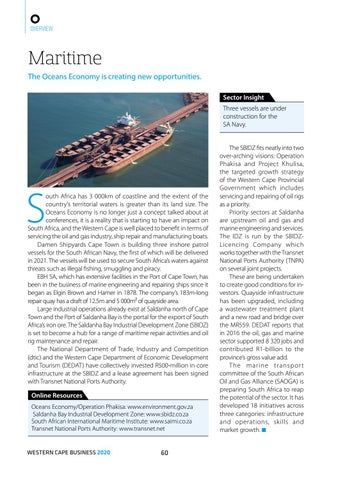 Maritime The Oceans Economy is creating new opportunities. Sector Insight Three vessels are under construction for the SA Navy.

outh Africa has 3 000km of coastline and the extent of the country’s territorial waters is greater than its land size. The Oceans Economy is no longer just a concept talked about at conferences, it is a reality that is starting to have an impact on South Africa, and the Western Cape is well placed to benefit in terms of servicing the oil and gas industry, ship repair and manufacturing boats. Damen Shipyards Cape Town is building three inshore patrol vessels for the South African Navy, the first of which will be delivered in 2021. The vessels will be used to secure South Africa’s waters against threats such as illegal fishing, smuggling and piracy. EBH SA, which has extensive facilities in the Port of Cape Town, has been in the business of marine engineering and repairing ships since it began as Elgin Brown and Hamer in 1878. The company’s 183m-long repair quay has a draft of 12.5m and 5 000m² of quayside area. Large industrial operations already exist at Saldanha north of Cape Town and the Port of Saldanha Bay is the portal for the export of South Africa’s iron ore. The Saldanha Bay Industrial Development Zone (SBIDZ) is set to become a hub for a range of maritime repair activities and oil rig maintenance and repair. The National Department of Trade, Industry and Competition (dtic) and the Western Cape Department of Economic Development and Tourism (DEDAT) have collectively invested R500-million in core infrastructure at the SBIDZ and a lease agreement has been signed with Transnet National Ports Authority.

The SBIDZ fits neatly into two over-arching visions: Operation Phakisa and Project Khulisa, the targeted growth strategy of the Western Cape Provincial Government which includes servicing and repairing of oil rigs as a priority. Priority sectors at Saldanha are upstream oil and gas and marine engineering and services. The IDZ is run by the SBIDZLicencing Company which works together with the Transnet National Ports Authority (TNPA) on several joint projects. These are being undertaken to create good conditions for investors. Quayside infrastructure has been upgraded, including a wastewater treatment plant and a new road and bridge over the MR559. DEDAT reports that in 2016 the oil, gas and marine sector supported 8 320 jobs and contributed R1-billion to the province’s gross value add. The mar ine transpor t committee of the South African Oil and Gas Alliance (SAOGA) is preparing South Africa to reap the potential of the sector. It has developed 18 initiatives across three categories: infrastructure and operations, skills and market growth. ■