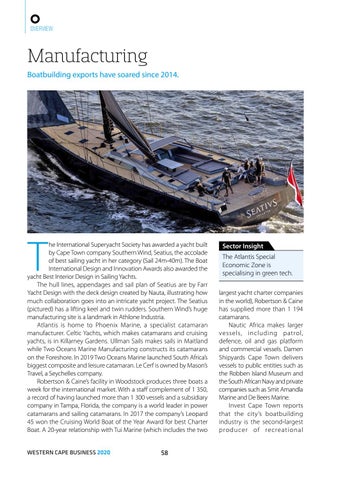 Manufacturing Boatbuilding exports have soared since 2014.

he International Superyacht Society has awarded a yacht built by Cape Town company Southern Wind, Seatius, the accolade of best sailing yacht in her category (Sail 24m-40m). The Boat International Design and Innovation Awards also awarded the yacht Best Interior Design in Sailing Yachts. The hull lines, appendages and sail plan of Seatius are by Farr Yacht Design with the deck design created by Nauta, illustrating how much collaboration goes into an intricate yacht project. The Seatius (pictured) has a lifting keel and twin rudders. Southern Wind’s huge manufacturing site is a landmark in Athlone Industria. Atlantis is home to Phoenix Marine, a specialist catamaran manufacturer. Celtic Yachts, which makes catamarans and cruising yachts, is in Killarney Gardens. Ullman Sails makes sails in Maitland while Two Oceans Marine Manufacturing constructs its catamarans on the Foreshore. In 2019 Two Oceans Marine launched South Africa’s biggest composite and leisure catamaran. Le Cerf is owned by Mason’s Travel, a Seychelles company. Robertson & Caine’s facility in Woodstock produces three boats a week for the international market. With a staff complement of 1 350, a record of having launched more than 1 300 vessels and a subsidiary company in Tampa, Florida, the company is a world leader in power catamarans and sailing catamarans. In 2017 the company’s Leopard 45 won the Cruising World Boat of the Year Award for best Charter Boat. A 20-year relationship with Tui Marine (which includes the two WESTERN CAPE BUSINESS 2020