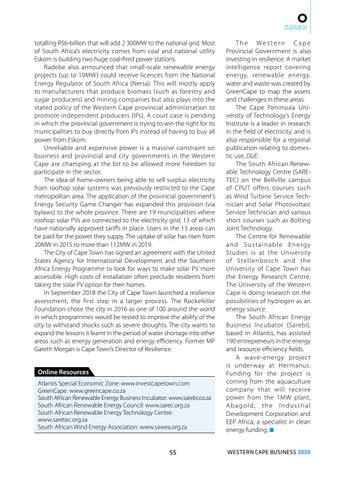 OVERVIEW totalling R56-billion that will add 2 300MW to the national grid. Most of South Africa’s electricity comes from coal and national utility Eskom is building two huge coal-fired power stations. Radebe also announced that small-scale renewable energy projects (up to 10MW) could receive licences from the National Energy Regulator of South Africa (Nersa). This will mostly apply to manufacturers that produce biomass (such as forestry and sugar producers) and mining companies but also plays into the stated policy of the Western Cape provincial administration to promote independent producers (IPs). A court case is pending in which the provincial government is trying to win the right for its municipalities to buy directly from IPs instead of having to buy all power from Eskom. Unreliable and expensive power is a massive constraint on business and provincial and city governments in the Western Cape are champing at the bit to be allowed more freedom to participate in the sector. The idea of home-owners being able to sell surplus electricity from rooftop solar systems was previously restricted to the Cape metropolitan area. The application of the provincial government’s Energy Security Game Changer has expanded this provision (via bylaws) to the whole province. There are 19 municipalities where rooftop solar PVs are connected to the electricity grid, 13 of which have nationally approved tariffs in place. Users in the 13 areas can be paid for the power they suppy. The uptake of solar has risen from 20MW in 2015 to more than 112MW in 2019. The City of Cape Town has signed an agreement with the United States Agency for International Development and the Southern Africa Energy Programme to look for ways to make solar PV more accessible. High costs of installation often preclude residents from taking the solar PV option for their homes. In September 2018 the City of Cape Town launched a resilience assessment, the first step in a larger process. The Rockefeller Foundation chose the city in 2016 as one of 100 around the world in which programmes would be tested to improve the ability of the city to withstand shocks such as severe droughts. The city wants to expand the lessons it learnt in the period of water shortage into other areas such as energy generation and energy efficiency. Former MP Gareth Morgan is Cape Town’s Director of Resilience.

The Western Cape Provincial Government is also investing in resilience. A market intelligence report covering energy, renewable energy, water and waste was created by GreenCape to map the assets and challenges in these areas. The Cape Peninsula University of Technology’s Energy Institute is a leader in research in the field of electricity, and is also responsible for a regional publication relating to domestic use, DUE. The South African Renewable Technology Centre (SARETEC) on the Bellville campus of CPUT offers courses such as Wind Turbine Service Technician and Solar Photovoltaic Service Technician and various short courses such as Bolting Joint Technology. The Centre for Renewable and Sustainable Energy Studies is at the University of Stellenbosch and the University of Cape Town has the Energy Research Centre. The University of the Western Cape is doing research on the possibilities of hydrogen as an energy source. The South African Energy Business Incubator (Sarebi), based in Atlantis, has assisted 190 entrepreneurs in the energy and resource efficiency fields. A wave-energy project is underway at Hermanus. Funding for the project is coming from the aquaculture company that will receive power from the 1MW plant, Abagold, the Industrial Development Corporation and EEP Africa, a specialist in clean energy funding. ■ WESTERN CAPE BUSINESS 2020