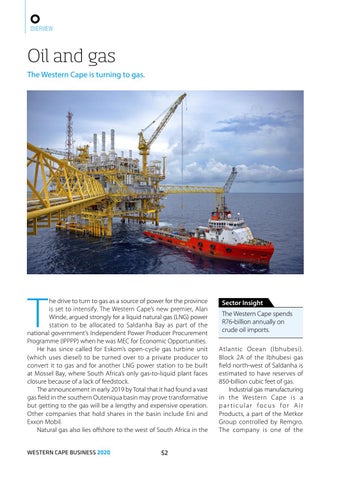 Oil and gas The Western Cape is turning to gas.

he drive to turn to gas as a source of power for the province is set to intensify. The Western Cape’s new premier, Alan Winde, argued strongly for a liquid natural gas (LNG) power station to be allocated to Saldanha Bay as part of the national government’s Independent Power Producer Procurement Programme (IPPPP) when he was MEC for Economic Opportunities. He has since called for Eskom’s open-cycle gas turbine unit (which uses diesel) to be turned over to a private producer to convert it to gas and for another LNG power station to be built at Mossel Bay, where South Africa’s only gas-to-liquid plant faces closure because of a lack of feedstock. The announcement in early 2019 by Total that it had found a vast gas field in the southern Outeniqua basin may prove transformative but getting to the gas will be a lengthy and expensive operation. Other companies that hold shares in the basin include Eni and Exxon Mobil. Natural gas also lies offshore to the west of South Africa in the WESTERN CAPE BUSINESS 2020

Sector Insight The Western Cape spends R76-billion annually on crude oil imports. Atlantic Ocean (Ibhubesi). Block 2A of the Ibhubesi gas field north-west of Saldanha is estimated to have reserves of 850-billion cubic feet of gas. Industrial gas manufacturing in the Western Cape is a par ticular focus for Air Products, a part of the Metkor Group controlled by Remgro. The company is one of the