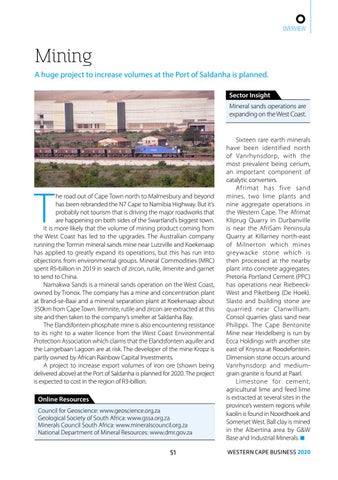 Mining A huge project to increase volumes at the Port of Saldanha is planned. Sector Insight Mineral sands operations are expanding on the West Coast.

he road out of Cape Town north to Malmesbury and beyond has been rebranded the N7 Cape to Namibia Highway. But it’s probably not tourism that is driving the major roadworks that are happening on both sides of the Swartland’s biggest town. It is more likely that the volume of mining product coming from the West Coast has led to the upgrades. The Australian company running the Tormin mineral sands mine near Lutzville and Koekenaap has applied to greatly expand its operations, but this has run into objections from environmental groups. Mineral Commodities (MRC) spent R5-billion in 2019 in search of zircon, rutile, ilmenite and garnet to send to China. Namakwa Sands is a mineral sands operation on the West Coast, owned by Tronox. The company has a mine and concentration plant at Brand-se-Baai and a mineral separation plant at Koekenaap about 350km from Cape Town. Ilemnite, rutile and zircon are extracted at this site and then taken to the company’s smelter at Saldanha Bay. The Elandsfontein phosphate mine is also encountering resistance to its right to a water licence from the West Coast Environmental Protection Association which claims that the Elandsfontein aquifer and the Langebaan Lagoon are at risk. The developer of the mine Kropz is partly owned by African Rainbow Capital Investments. A project to increase export volumes of iron ore (shown being delivered above) at the Port of Saldanha is planned for 2020. The project is expected to cost in the region of R3-billion.

Sixteen rare earth minerals have been identified north of Vanrhynsdorp, with the most prevalent being cerium, an important component of catalytic converters. Afrimat has five sand mines, two lime plants and nine aggregate operations in the Western Cape. The Afrimat Kliprug Quarry in Durbanville is near the AfriSam Peninsula Quarry at Killarney north-east of Milnerton which mines greywacke stone which is then processed at the nearby plant into concrete aggregates. Pretoria Portland Cement (PPC) has operations near RiebeeckWest and Piketberg (De Hoek). Slasto and building stone are quarried near Clanwilliam. Consol quarries glass sand near Philippi. The Cape Bentonite Mine near Heidelberg is run by Ecca Holdings with another site east of Knysna at Roodefontein. Dimension stone occurs around Vanrhynsdorp and mediumgrain granite is found at Paarl. Limestone for cement, agricultural lime and feed lime is extracted at several sites in the province’s western regions while kaolin is found in Noordhoek and Somerset West. Ball clay is mined in the Albertina area by G&W Base and Industrial Minerals. ■ WESTERN CAPE BUSINESS 2020