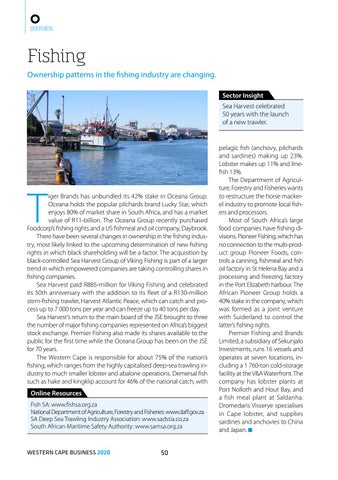 Fishing Ownership patterns in the fishing industry are changing. Sector Insight Sea Harvest celebrated 50 years with the launch of a new trawler.

iger Brands has unbundled its 42% stake in Oceana Group. Oceana holds the popular pilchards brand Lucky Star, which enjoys 80% of market share in South Africa, and has a market value of R11-billion. The Oceana Group recently purchased Foodcorp’s fishing rights and a US fishmeal and oil company, Daybrook. There have been several changes in ownership in the fishing industry, most likely linked to the upcoming determination of new fishing rights in which black shareholding will be a factor. The acquisition by black-controlled Sea Harvest Group of Viking Fishing is part of a larger trend in which empowered companies are taking controlling shares in fishing companies. Sea Harvest paid R885-million for Viking Fishing and celebrated its 50th anniversary with the addition to its fleet of a R130-million stern-fishing trawler, Harvest Atlantic Peace, which can catch and process up to 7 000 tons per year and can freeze up to 40 tons per day. Sea Harvest’s return to the main board of the JSE brought to three the number of major fishing companies represented on Africa’s biggest stock exchange. Premier Fishing also made its shares available to the public for the first time while the Oceana Group has been on the JSE for 70 years. The Western Cape is responsible for about 75% of the nation’s fishing, which ranges from the highly capitalised deep-sea trawling industry to much smaller lobster and abalone operations. Demersal fish such as hake and kingklip account for 46% of the national catch, with

pelagic fish (anchovy, pilchards and sardines) making up 23%. Lobster makes up 11% and linefish 13%. The Department of Agriculture, Forestry and Fisheries wants to restructure the horse mackerel industry to promote local fishers and processors. Most of South Africa’s large food companies have fishing divisions. Pioneer Fishing, which has no connection to the multi-product group Pioneer Foods, controls a canning, fishmeal and fish oil factory in St Helena Bay and a processing and freezing factory in the Port Elizabeth harbour. The African Pioneer Group holds a 40% stake in the company, which was formed as a joint venture with Suiderland to control the latter’s fishing rights. Premier Fishing and Brands Limited, a subsidiary of Sekunjalo Investments, runs 16 vessels and operates at seven locations, including a 1 760-ton cold-storage facility at the V&A Waterfront. The company has lobster plants at Port Nolloth and Hout Bay, and a fish meal plant at Saldanha. Dromedaris Visserye specialises in Cape lobster, and supplies sardines and anchovies to China and Japan. ■