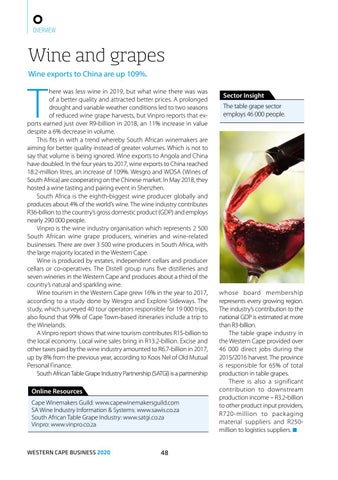 Wine and grapes Wine exports to China are up 109%.

here was less wine in 2019, but what wine there was was of a better quality and attracted better prices. A prolonged drought and variable weather conditions led to two seasons of reduced wine grape harvests, but Vinpro reports that exports earned just over R9-billion in 2018, an 11% increase in value despite a 6% decrease in volume. This fits in with a trend whereby South African winemakers are aiming for better quality instead of greater volumes. Which is not to say that volume is being ignored. Wine exports to Angola and China have doubled. In the four years to 2017, wine exports to China reached 18.2-million litres, an increase of 109%. Wesgro and WOSA (Wines of South Africa) are cooperating on the Chinese market. In May 2018, they hosted a wine tasting and pairing event in Shenzhen. South Africa is the eighth-biggest wine producer globally and produces about 4% of the world’s wine. The wine industry contributes R36-billion to the country’s gross domestic product (GDP) and employs nearly 290 000 people. Vinpro is the wine industry organisation which represents 2 500 South African wine grape producers, wineries and wine-related businesses. There are over 3 500 wine producers in South Africa, with the large majority located in the Western Cape. Wine is produced by estates, independent cellars and producer cellars or co-operatives. The Distell group runs five distilleries and seven wineries in the Western Cape and produces about a third of the country’s natural and sparkling wine. Wine tourism in the Western Cape grew 16% in the year to 2017, according to a study done by Wesgro and Explore Sideways. The study, which surveyed 40 tour operators responsible for 19 000 trips, also found that 99% of Cape Town-based itineraries include a trip to the Winelands. A Vinpro report shows that wine tourism contributes R15-billion to the local economy. Local wine sales bring in R13.2-billion. Excise and other taxes paid by the wine industry amounted to R6.7-billion in 2017, up by 8% from the previous year, according to Koos Nel of Old Mutual Personal Finance. South African Table Grape Industry Partnership (SATGI) is a partnership

whose board membership represents every growing region. The industry’s contribution to the national GDP is estimated at more than R3-billion. The table grape industry in the Western Cape provided over 46 000 direct jobs during the 2015/2016 harvest. The province is responsible for 65% of total production in table grapes. There is also a significant contribution to downstream production income – R3.2-billion to other product input providers, R720-million to packaging material suppliers and R250million to logistics suppliers. ■