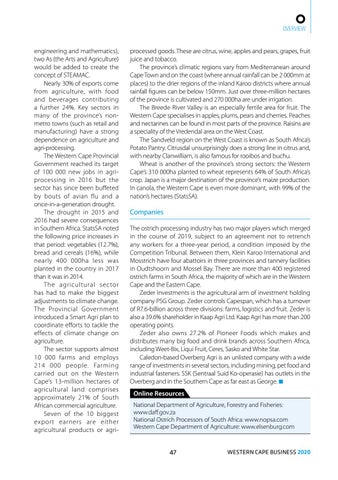 OVERVIEW engineering and mathematics), two As (the Arts and Agriculture) would be added to create the concept of STEAMAC. Nearly 30% of exports come from agriculture, with food and beverages contributing a further 24%. Key sectors in many of the province’s nonmetro towns (such as retail and manufacturing) have a strong dependence on agriculture and agri-processing. The Western Cape Provincial Government reached its target of 100 000 new jobs in agriprocessing in 2016 but the sector has since been buffeted by bouts of avian flu and a once-in-a-generation drought. The drought in 2015 and 2016 had severe consequences in Southern Africa. StatsSA noted the following price increases in that period: vegetables (12.7%), bread and cereals (16%), while nearly 400 000ha less was planted in the country in 2017 than it was in 2014. The agricultural sector has had to make the biggest adjustments to climate change. The Provincial Government introduced a Smart Agri plan to coordinate efforts to tackle the effects of climate change on agriculture. The sector supports almost 10 000 farms and employs 214 000 people. Farming carried out on the Western Cape’s 13-million hectares of agricultural land comprises approximately 21% of South African commercial agriculture. Seven of the 10 biggest export earners are either agricultural products or agri-

processed goods. These are citrus, wine, apples and pears, grapes, fruit juice and tobacco. The province’s climatic regions vary from Mediterranean around Cape Town and on the coast (where annual rainfall can be 2 000mm at places) to the drier regions of the inland Karoo districts where annual rainfall figures can be below 150mm. Just over three-million hectares of the province is cultivated and 270 000ha are under irrigation. The Breede River Valley is an especially fertile area for fruit. The Western Cape specialises in apples, plums, pears and cherries. Peaches and nectarines can be found in most parts of the province. Raisins are a speciality of the Vredendal area on the West Coast. The Sandveld region on the West Coast is known as South Africa’s Potato Pantry. Citrusdal unsurprisingly does a strong line in citrus and, with nearby Clanwilliam, is also famous for rooibos and buchu. Wheat is another of the province’s strong sectors: the Western Cape’s 310 000ha planted to wheat represents 64% of South Africa’s crop. Japan is a major destination of the province’s maize production. In canola, the Western Cape is even more dominant, with 99% of the nation’s hectares (StatsSA).

Companies The ostrich processing industry has two major players which merged in the course of 2019, subject to an agreement not to retrench any workers for a three-year period, a condition imposed by the Competition Tribunal. Between them, Klein Karoo International and Mosstrich have four abattoirs in three provinces and tannery facilities in Oudtshoorn and Mossel Bay. There are more than 400 registered ostrich farms in South Africa, the majority of which are in the Western Cape and the Eastern Cape. Zeder Investments is the agricultural arm of investment holding company PSG Group. Zeder controls Capespan, which has a turnover of R7.6-billion across three divisions: farms, logistics and fruit. Zeder is also a 39.6% shareholder in Kaap Agri Ltd. Kaap Agri has more than 200 operating points. Zeder also owns 27.2% of Pioneer Foods which makes and distributes many big food and drink brands across Southern Africa, including Weet-Bix, Liqui Fruit, Ceres, Sasko and White Star. Caledon-based Overberg Agri is an unlisted company with a wide range of investments in several sectors, including mining, pet food and industrial fasteners. SSK (Sentraal Suid Ko-operasie) has outlets in the Overberg and in the Southern Cape as far east as George. ■