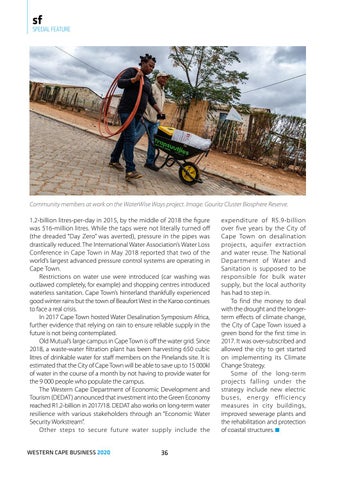 Community members at work on the WaterWise Ways project. Image: Gouritz Cluster Biosphere Reserve. 1.2-billion litres-per-day in 2015, by the middle of 2018 the figure was 516-million litres. While the taps were not literally turned off (the dreaded “Day Zero” was averted), pressure in the pipes was drastically reduced. The International Water Association’s Water Loss Conference in Cape Town in May 2018 reported that two of the world’s largest advanced pressure control systems are operating in Cape Town. Restrictions on water use were introduced (car washing was outlawed completely, for example) and shopping centres introduced waterless sanitation. Cape Town’s hinterland thankfully experienced good winter rains but the town of Beaufort West in the Karoo continues to face a real crisis. In 2017 Cape Town hosted Water Desalination Symposium Africa, further evidence that relying on rain to ensure reliable supply in the future is not being contemplated. Old Mutual’s large campus in Cape Town is off the water grid. Since 2018, a waste-water filtration plant has been harvesting 650 cubic litres of drinkable water for staff members on the Pinelands site. It is estimated that the City of Cape Town will be able to save up to 15 000kl of water in the course of a month by not having to provide water for the 9 000 people who populate the campus. The Western Cape Department of Economic Development and Tourism (DEDAT) announced that investment into the Green Economy reached R1.2-billion in 2017/18. DEDAT also works on long-term water resilience with various stakeholders through an “Economic Water Security Workstream”. Other steps to secure future water supply include the WESTERN CAPE BUSINESS 2020

expenditure of R5.9-billion over five years by the City of Cape Town on desalination projects, aquifer extraction and water reuse. The National Department of Water and Sanitation is supposed to be responsible for bulk water supply, but the local authority has had to step in. To find the money to deal with the drought and the longerterm effects of climate change, the City of Cape Town issued a green bond for the first time in 2017. It was over-subscribed and allowed the city to get started on implementing its Climate Change Strategy. Some of the long-term projects falling under the strategy include new electric buses, energy efficienc y measures in city buildings, improved sewerage plants and the rehabilitation and protection of coastal structures. ■