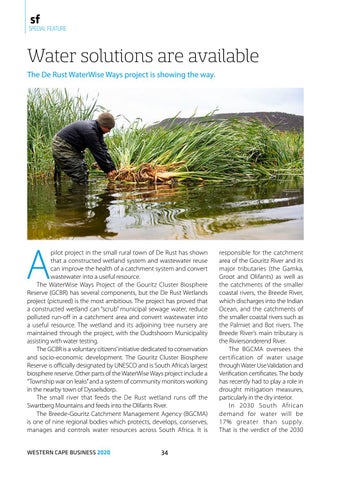 pilot project in the small rural town of De Rust has shown that a constructed wetland system and wastewater reuse can improve the health of a catchment system and convert wastewater into a useful resource. The WaterWise Ways Project of the Gouritz Cluster Biosphere Reserve (GCBR) has several components, but the De Rust Wetlands project (pictured) is the most ambitious. The project has proved that a constructed wetland can “scrub” municipal sewage water, reduce polluted run-off in a catchment area and convert wastewater into a useful resource. The wetland and its adjoining tree nursery are maintained through the project, with the Oudtshoorn Municipality assisting with water testing. The GCBR is a voluntary citizens’ initiative dedicated to conservation and socio-economic development. The Gouritz Cluster Biosphere Reserve is officially designated by UNESCO and is South Africa’s largest biosphere reserve. Other parts of the WaterWise Ways project include a “Township war on leaks” and a system of community monitors working in the nearby town of Dysselsdorp. The small river that feeds the De Rust wetland runs off the Swartberg Mountains and feeds into the Olifants River. The Breede-Gouritz Catchment Management Agency (BGCMA) is one of nine regional bodies which protects, develops, conserves, manages and controls water resources across South Africa. It is WESTERN CAPE BUSINESS 2020

responsible for the catchment area of the Gouritz River and its major tributaries (the Gamka, Groot and Olifants) as well as the catchments of the smaller coastal rivers, the Breede River, which discharges into the Indian Ocean, and the catchments of the smaller coastal rivers such as the Palmiet and Bot rivers. The Breede River’s main tributary is the Riviersonderend River. The BGCMA oversees the certification of water usage through Water Use Validation and Verification certificates. The body has recently had to play a role in drought mitigation measures, particularly in the dry interior. In 2030 South African demand for water will be 17% greater than supply. That is the verdict of the 2030