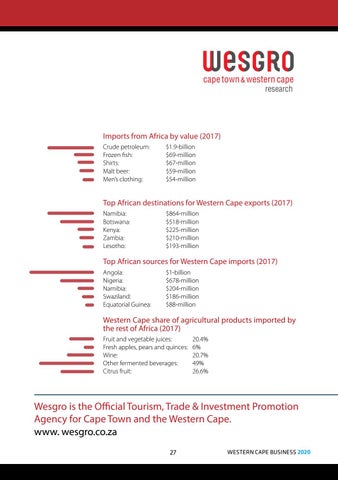 Crude petroleum: $1.9-billion Frozen fish: $69-million The Western Cape exported USD9.33bn worth of goods USD13.9bn worth of goods in 2017. The Shirts: and imported$67-million trade deficit is mainly due to the large importMalt of petroleum when excluded from imports and exports beer: products, that $59-million reverse to a trade surplus. The strategic location of the Western Cape, being home to three important South African Men’s clothing: $54-million ports makes it the second largest province in terms of total trade after Gauteng. The Western Cape’s total share of South African exports was 10.46% in 2017.

The Western Cape has advantageous access to world markets through preferential trade agreements between Namibia: $864-million Botswana: the United States. $518-million South Africa and other major markets such as Europe and South Africa is also a member of the Kenya: the Trade Development $225-million Southern Africa Development Community (SADC), and Cooperation Agreement (TDCA) Zambia: $210-million and the Southern African Customs Union (SACU) among other agreements. The international trade regime has $193-million certainly seen some reorganisation of late. Lesotho: To the North, Brexit has cast widespread uncertainty across almost every aspect of cross-border trade and investment involving the UK. To the West, global supply chains have been Top foronWestern imports (2017) unsettled by the renegotiation of NAFTA (now theAfrican USMCA) sources and US tariffs steel and Cape aluminium. To the East, Angola: $1-billion China’s escalating trade war with America will have far-reaching economic repercussions. Nigeria: $678-million The potential showstopper, however, is happening right here on the doorstep of the Western Cape, with the signing Namibia: $204-million Swaziland: of the African Continental Free Trade Area (AfCFTA) Agreement earlier$186-million in 2018. The AfCFTA aims to establish a Equatorial Guinea: (AU). $88-million free trade area spanning the 55 Member States of the African Union It was launched in March 2018 and has been signed by 49 countries. The AfCFTA includes undertakings by Member States to progressively eliminate Cape of agricultural products imported by tariffs and non-tariff barriers to trade in goodsWestern and liberalise trade share in services; cooperate on investment, intellectual rest property rights, competition policy, customs the matters, andoftoAfrica establish(2017) a dispute settlement system. Fruit and vegetable juices: 20.4% The AfCFTA is aspirational by nature; it is Fresh a framework will systematically be implemented by apples,agreement pears and that quinces: 6% building upon existing Regional EconomicWine: Communities (RECs) and preferential 20.7%trade arrangements. The beverages: 49% Agreement establishes an agenda by which Other further fermented technical alignment and trade liberalisation will take place. The fruit: Agreement enters into force once ratified byCitrus 22 countries. Although South Africa 26.6% is likely to ratify the AfCFTA by the end of 2018, most of the details are only set to be negotiated over the coming years. Once in force and ratified the Agreement will become legally binding for South Africa.

Successful implementation of this agreement holds the potential to change the face of intra-African trade and Wesgro is the Official Tourism, Trade & Investment Promotion facilitate enormous investment into the Continent. The AfCFTA will cover a market of 1.2 billion people, projected Agency fora Cape andproduct the Western to reach 2.5 billion by 2050, and combinedTown gross domestic (GDP) of more Cape. than USD3.4 trillion. The economy of Africa as a whole is the second fastest growing region in the world however intra-Africa trade remains www. wesgro.co.za low (Afdb, 2017). In 2016 intra-Africa trade constituted only 18% of Africa’s total trade with the globe (Tralac, 2018). The United Nations Economic Commission for Africa therefore estimates that the AfCFTA has the potential to WESTERN CAPE BUSINESS 2020 27 boost intra-Africa trade by 52% by eliminating tariffs. They also predict that the figure would double through the elimination of non-tariff barriers.