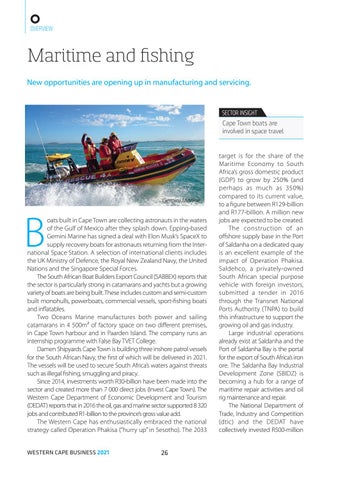 Maritime and fishing New opportunities are opening up in manufacturing and servicing.

oats built in Cape Town are collecting astronauts in the waters of the Gulf of Mexico after they splash down. Epping-based Gemini Marine has signed a deal with Elon Musk’s SpaceX to supply recovery boats for astronauts returning from the International Space Station. A selection of international clients includes the UK Ministry of Defence, the Royal New Zealand Navy, the United Nations and the Singapore Special Forces. The South African Boat Builders Export Council (SABBEX) reports that the sector is particularly strong in catamarans and yachts but a growing variety of boats are being built. These includes custom and semi-custom built monohulls, powerboats, commercial vessels, sport-fishing boats and inflatables. Two Oceans Marine manufactures both power and sailing catamarans in 4 500m² of factory space on two different premises, in Cape Town harbour and in Paarden Island. The company runs an internship programme with False Bay TVET College. Damen Shipyards Cape Town is building three inshore patrol vessels for the South African Navy, the first of which will be delivered in 2021. The vessels will be used to secure South Africa’s waters against threats such as illegal fishing, smuggling and piracy. Since 2014, investments worth R30-billion have been made into the sector and created more than 7 000 direct jobs (Invest Cape Town). The Western Cape Department of Economic Development and Tourism (DEDAT) reports that in 2016 the oil, gas and marine sector supported 8 320 jobs and contributed R1-billion to the province’s gross value add. The Western Cape has enthusiastically embraced the national strategy called Operation Phakisa (“hurry up” in Sesotho). The 2033

target is for the share of the Maritime Economy to South Africa’s gross domestic product (GDP) to grow by 250% (and perhaps as much as 350%) compared to its current value, to a figure between R129-billion and R177-billion. A million new jobs are expected to be created. The construction of an offshore supply base in the Port of Saldanha on a dedicated quay is an excellent example of the impact of Operation Phakisa. Saldehco, a privately-owned South African special purpose vehicle with foreign investors, submitted a tender in 2016 through the Transnet National Ports Authority (TNPA) to build this infrastructure to support the growing oil and gas industry. Large industrial operations already exist at Saldanha and the Port of Saldanha Bay is the portal for the export of South Africa’s iron ore. The Saldanha Bay Industrial Development Zone (SBIDZ) is becoming a hub for a range of maritime repair activities and oil rig maintenance and repair. The National Department of Trade, Industry and Competition (dtic) and the DEDAT have collectively invested R500-million