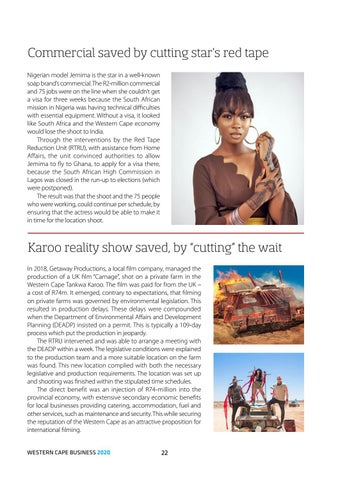 Commercial saved by cutting star’s red tape Nigerian model Jemima is the star in a well-known soap brand’s commercial. The R2-million commercial and 75 jobs were on the line when she couldn’t get a visa for three weeks because the South African mission in Nigeria was having technical difficulties with essential equipment. Without a visa, it looked like South Africa and the Western Cape economy would lose the shoot to India. Through the interventions by the Red Tape Reduction Unit (RTRU), with assistance from Home Affairs, the unit convinced authorities to allow Jemima to fly to Ghana, to apply for a visa there, because the South African High Commission in Lagos was closed in the run-up to elections (which were postponed). The result was that the shoot and the 75 people who were working, could continue per schedule, by ensuring that the actress would be able to make it in time for the location shoot.

Karoo reality show saved, by “cutting” the wait In 2018, Getaway Productions, a local film company, managed the production of a UK film “Carnage”, shot on a private farm in the Western Cape Tankwa Karoo. The film was paid for from the UK – a cost of R74m. It emerged, contrary to expectations, that filming on private farms was governed by environmental legislation. This resulted in production delays. These delays were compounded when the Department of Environmental Affairs and Development Planning (DEADP) insisted on a permit. This is typically a 109-day process which put the production in jeopardy. The RTRU intervened and was able to arrange a meeting with the DEADP within a week. The legislative conditions were explained to the production team and a more suitable location on the farm was found. This new location complied with both the necessary legislative and production requirements. The location was set up and shooting was finished within the stipulated time schedules. The direct benefit was an injection of R74-million into the provincial economy, with extensive secondary economic benefits for local businesses providing catering, accommodation, fuel and other services, such as maintenance and security. This while securing the reputation of the Western Cape as an attractive proposition for international filming. WESTERN CAPE BUSINESS 2020