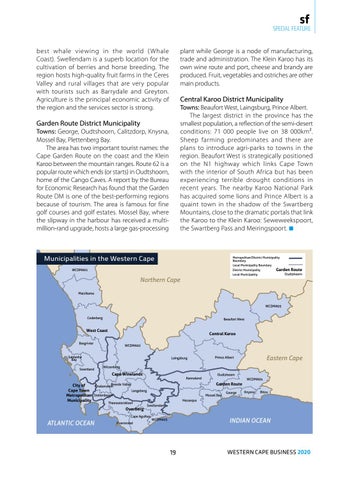 SPECIAL FEATURE best whale viewing in the world ( Whale Coast). Swellendam is a superb location for the cultivation of berries and horse breeding. The region hosts high-quality fruit farms in the Ceres Valley and rural villages that are very popular with tourists such as Barrydale and Greyton. Agriculture is the principal economic activity of the region and the services sector is strong.

plant while George is a node of manufacturing, trade and administration. The Klein Karoo has its own wine route and port, cheese and brandy are produced. Fruit, vegetables and ostriches are other main products.

Towns: Beaufort West, Laingsburg, Prince Albert. The largest district in the province has the smallest population, a reflection of the semi-desert conditions: 71 000 people live on 38 000kmÂ˛. Sheep farming predominates and there are plans to introduce agri-parks to towns in the region. Beaufort West is strategically positioned on the N1 highway which links Cape Town with the interior of South Africa but has been experiencing terrible drought conditions in recent years. The nearby Karoo National Park has acquired some lions and Prince Albert is a quaint town in the shadow of the Swartberg Mountains, close to the dramatic portals that link the Karoo to the Klein Karoo: Seweweekspoort, the Swartberg Pass and Meiringspoort. â&#x2013;

Towns: George, Oudtshoorn, Calitzdorp, Knysna, Mossel Bay, Plettenberg Bay. The area has two important tourist names: the Cape Garden Route on the coast and the Klein Karoo between the mountain ranges. Route 62 is a popular route which ends (or starts) in Oudtshoorn, home of the Cango Caves. A report by the Bureau for Economic Research has found that the Garden Route DM is one of the best-performing regions because of tourism. The area is famous for fine golf courses and golf estates. Mossel Bay, where the slipway in the harbour has received a multimillion-rand upgrade, hosts a large gas-processing

Municipalities in the Western Cape