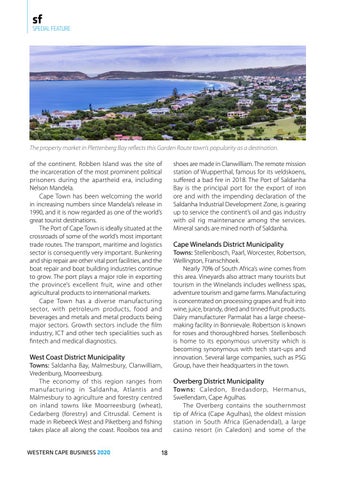 The property market in Plettenberg Bay reflects this Garden Route town’s popularity as a destination. of the continent. Robben Island was the site of the incarceration of the most prominent political prisoners during the apartheid era, including Nelson Mandela. Cape Town has been welcoming the world in increasing numbers since Mandela’s release in 1990, and it is now regarded as one of the world’s great tourist destinations. The Port of Cape Town is ideally situated at the crossroads of some of the world’s most important trade routes. The transport, maritime and logistics sector is consequently very important. Bunkering and ship repair are other vital port facilities, and the boat repair and boat building industries continue to grow. The port plays a major role in exporting the province’s excellent fruit, wine and other agricultural products to international markets. Cape Town has a diverse manufacturing sector, with petroleum products, food and beverages and metals and metal products being major sectors. Growth sectors include the film industry, ICT and other tech specialities such as fintech and medical diagnostics.

Towns: Saldanha Bay, Malmesbury, Clanwilliam, Vredenburg, Moorreesburg. The economy of this region ranges from manufacturing in Saldanha, Atlantis and Malmesbury to agriculture and forestry centred on inland towns like Moorreesburg (wheat), Cedarberg (forestry) and Citrusdal. Cement is made in Riebeeck West and Piketberg and fishing takes place all along the coast. Rooibos tea and WESTERN CAPE BUSINESS 2020

shoes are made in Clanwilliam. The remote mission station of Wupperthal, famous for its veldskoens, suffered a bad fire in 2018. The Port of Saldanha Bay is the principal port for the export of iron ore and with the impending declaration of the Saldanha Industrial Development Zone, is gearing up to service the continent’s oil and gas industry with oil rig maintenance among the services. Mineral sands are mined north of Saldanha.

Towns: Stellenbosch, Paarl, Worcester, Robertson, Wellington, Franschhoek. Nearly 70% of South Africa’s wine comes from this area. Vineyards also attract many tourists but tourism in the Winelands includes wellness spas, adventure tourism and game farms. Manufacturing is concentrated on processing grapes and fruit into wine, juice, brandy, dried and tinned fruit products. Dairy manufacturer Parmalat has a large cheesemaking facility in Bonnievale. Robertson is known for roses and thoroughbred horses. Stellenbosch is home to its eponymous university which is becoming synonymous with tech start-ups and innovation. Several large companies, such as PSG Group, have their headquarters in the town.

Towns: Caledon, Bredasdorp, Hermanus, Swellendam, Cape Agulhas. The Overberg contains the southernmost tip of Africa (Cape Agulhas), the oldest mission station in South Africa (Genadendal), a large casino resort (in Caledon) and some of the