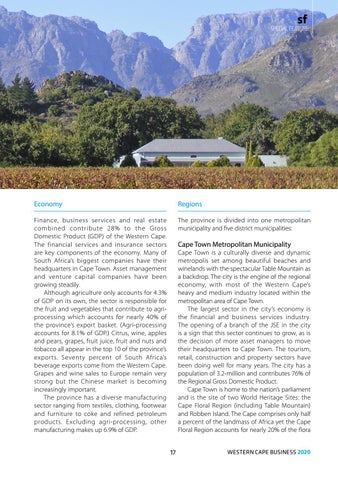 Finance, business services and real estate combined contribute 28% to the Gross Domestic Product (GDP) of the Western Cape. The financial services and insurance sectors are key components of the economy. Many of South Africa’s biggest companies have their headquarters in Cape Town. Asset management and venture capital companies have been growing steadily. Although agriculture only accounts for 4.3% of GDP on its own, the sector is responsible for the fruit and vegetables that contribute to agriprocessing which accounts for nearly 40% of the province’s export basket. (Agri-processing accounts for 8.1% of GDP.) Citrus, wine, apples and pears, grapes, fruit juice, fruit and nuts and tobacco all appear in the top 10 of the province’s exports. Seventy percent of South Africa’s beverage exports come from the Western Cape. Grapes and wine sales to Europe remain very strong but the Chinese market is becoming increasingly important. The province has a diverse manufacturing sector ranging from textiles, clothing, footwear and furniture to coke and refined petroleum products. Excluding agri-processing, other manufacturing makes up 6.9% of GDP.

The province is divided into one metropolitan municipality and five district municipalities:

Cape Town Metropolitan Municipality Cape Town is a culturally diverse and dynamic metropolis set among beautiful beaches and winelands with the spectacular Table Mountain as a backdrop. The city is the engine of the regional economy, with most of the Western Cape’s heavy and medium industry located within the metropolitan area of Cape Town. The largest sector in the city’s economy is the financial and business services industry. The opening of a branch of the JSE in the city is a sign that this sector continues to grow, as is the decision of more asset managers to move their headquarters to Cape Town. The tourism, retail, construction and property sectors have been doing well for many years. The city has a population of 3.2-million and contributes 76% of the Regional Gross Domestic Product. Cape Town is home to the nation’s parliament and is the site of two World Heritage Sites: the Cape Floral Region (including Table Mountain) and Robben Island. The Cape comprises only half a percent of the landmass of Africa yet the Cape Floral Region accounts for nearly 20% of the flora