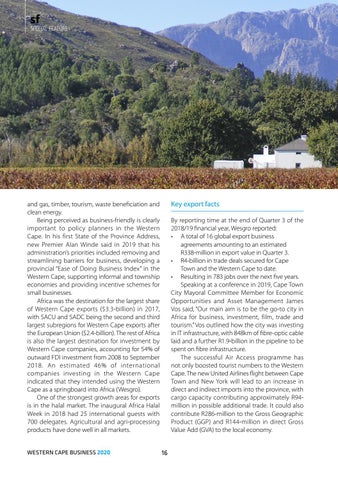 and gas, timber, tourism, waste beneficiation and clean energy. Being perceived as business-friendly is clearly important to policy planners in the Western Cape. In his first State of the Province Address, new Premier Alan Winde said in 2019 that his administration’s priorities included removing and streamlining barriers for business, developing a provincial “Ease of Doing Business Index” in the Western Cape, supporting informal and township economies and providing incentive schemes for small businesses. Africa was the destination for the largest share of Western Cape exports ($3.3-billion) in 2017, with SACU and SADC being the second and third largest subregions for Western Cape exports after the European Union ($2.4-billion). The rest of Africa is also the largest destination for investment by Western Cape companies, accounting for 54% of outward FDI investment from 2008 to September 2018. An estimated 46% of international companies investing in the Western Cape indicated that they intended using the Western Cape as a springboard into Africa (Wesgro). One of the strongest growth areas for exports is in the halal market. The inaugural Africa Halal Week in 2018 had 25 international guests with 700 delegates. Agricultural and agri-processing products have done well in all markets. WESTERN CAPE BUSINESS 2020

By reporting time at the end of Quarter 3 of the 2018/19 financial year, Wesgro reported: • A total of 16 global export business agreements amounting to an estimated R338-million in export value in Quarter 3. • R4-billion in trade deals secured for Cape Town and the Western Cape to date. • Resulting in 783 jobs over the next five years. Speaking at a conference in 2019, Cape Town City Mayoral Committee Member for Economic Opportunities and Asset Management James Vos said, “Our main aim is to be the go-to city in Africa for business, investment, film, trade and tourism.” Vos outlined how the city was investing in IT infrastructure, with 848km of fibre-optic cable laid and a further R1.9-billion in the pipeline to be spent on fibre infrastructure. The successful Air Access programme has not only boosted tourist numbers to the Western Cape. The new United Airlines flight between Cape Town and New York will lead to an increase in direct and indirect imports into the province, with cargo capacity contributing approximately R94million in possible additional trade. It could also contribute R286-million to the Gross Geographic Product (GGP) and R144-million in direct Gross Value Add (GVA) to the local economy.