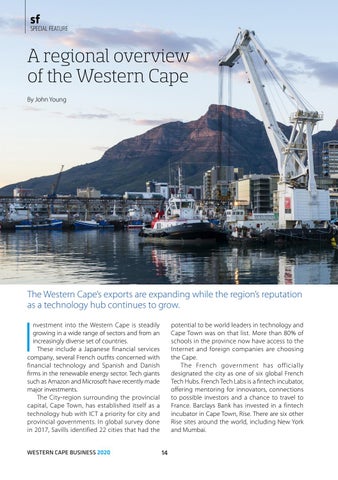 A regional overview of the Western Cape By John Young

nvestment into the Western Cape is steadily growing in a wide range of sectors and from an increasingly diverse set of countries. These include a Japanese financial services company, several French outfits concerned with financial technology and Spanish and Danish firms in the renewable energy sector. Tech giants such as Amazon and Microsoft have recently made major investments. The City-region surrounding the provincial capital, Cape Town, has established itself as a technology hub with ICT a priority for city and provincial governments. In global survey done in 2017, Savills identified 22 cities that had the

potential to be world leaders in technology and Cape Town was on that list. More than 80% of schools in the province now have access to the Internet and foreign companies are choosing the Cape. The French government has officially designated the city as one of six global French Tech Hubs. French Tech Labs is a fintech incubator, offering mentoring for innovators, connections to possible investors and a chance to travel to France. Barclays Bank has invested in a fintech incubator in Cape Town, Rise. There are six other Rise sites around the world, including New York and Mumbai.