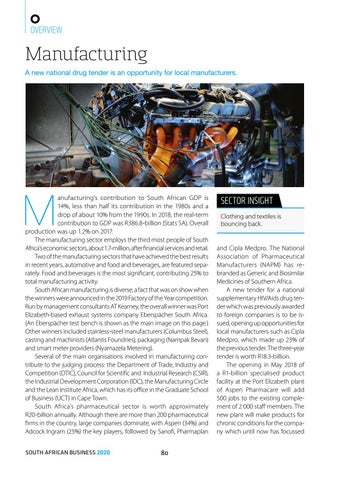 Manufacturing A new national drug tender is an opportunity for local manufacturers.

anufacturing’s contribution to South African GDP is 14%, less than half its contribution in the 1980s and a drop of about 10% from the 1990s. In 2018, the real-term contribution to GDP was R386.8-billion (Stats SA). Overall production was up 1.2% on 2017. The manufacturing sector employs the third most people of South Africa’s economic sectors, about 1.7-million, after financial services and retail. Two of the manufacturing sectors that have achieved the best results in recent years, automotive and food and beverages, are featured separately. Food and beverages is the most significant, contributing 25% to total manufacturing activity. South African manufacturing is diverse, a fact that was on show when the winners were announced in the 2019 Factory of the Year competition. Run by management consultants AT Kearney, the overall winner was Port Elizabeth-based exhaust systems company Eberspächer South Africa. (An Eberspächer test bench is shown as the main image on this page.) Other winners included stainless-steel manufacturers (Columbus Steel), casting and machinists (Atlantis Foundries), packaging (Nampak Bevan) and smart meter providers (Nyamazela Metering). Several of the main organisations involved in manufacturing contribute to the judging process: the Department of Trade, Industry and Competition (DTIC), Council for Scientific and Industrial Research (CSIR), the Industrial Development Corporation (IDC), the Manufacturing Circle and the Lean Institute Africa, which has its office in the Graduate School of Business (UCT) in Cape Town. South Africa’s pharmaceutical sector is worth approximately R20-billion annually. Although there are more than 200 pharmaceutical firms in the country, large companies dominate, with Aspen (34%) and Adcock Ingram (25%) the key players, followed by Sanofi, Pharmaplan SOUTH AFRICAN BUSINESS 2020

SECTOR INSIGHT Clothing and textiles is bouncing back. and Cipla Medpro. The National Association of Pharmaceutical Manufacturers (NAPM) has rebranded as Generic and Biosimilar Medicines of Southern Africa. A new tender for a national supplementary HIV/Aids drug tender which was previously awarded to foreign companies is to be issued, opening up opportunities for local manufacturers such as Cipla Medpro, which made up 23% of the previous tender. The three-year tender is worth R18.3-billion. The opening in May 2018 of a R1-billion specialised product facility at the Port Elizabeth plant of Aspen Pharmacare will add 500 jobs to the existing complement of 2 000 staff members. The new plant will make products for chronic conditions for the company which until now has focussed