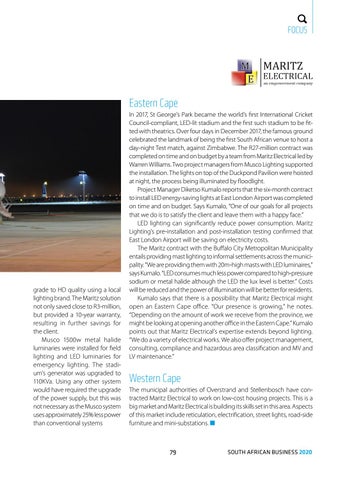 grade to HD quality using a local lighting brand. The Maritz solution not only saved close to R3-million, but provided a 10-year warranty, resulting in further savings for the client. Musco 1500w metal halide luminaries were installed for field lighting and LED luminaries for emergency lighting. The stadium’s generator was upgraded to 110KVa. Using any other system would have required the upgrade of the power supply, but this was not necessary as the Musco system uses approximately 25% less power than conventional systems

In 2017, St George’s Park became the world’s first International Cricket Council-compliant, LED-lit stadium and the first such stadium to be fitted with theatrics. Over four days in December 2017, the famous ground celebrated the landmark of being the first South African venue to host a day-night Test match, against Zimbabwe. The R27-million contract was completed on time and on budget by a team from Maritz Electrical led by Warren Williams. Two project managers from Musco Lighting supported the installation. The lights on top of the Duckpond Pavilion were hoisted at night, the process being illuminated by floodlight. Project Manager Diketso Kumalo reports that the six-month contract to install LED energy-saving lights at East London Airport was completed on time and on budget. Says Kumalo, “One of our goals for all projects that we do is to satisfy the client and leave them with a happy face.” LED lighting can significantly reduce power consumption. Maritz Lighting’s pre-installation and post-installation testing confirmed that East London Airport will be saving on electricity costs. The Maritz contract with the Buffalo City Metropolitan Municipality entails providing mast lighting to informal settlements across the municipality. “We are providing them with 20m-high masts with LED luminaires,” says Kumalo. “LED consumes much less power compared to high-pressure sodium or metal halide although the LED the lux level is better.” Costs will be reduced and the power of illumination will be better for residents. Kumalo says that there is a possibility that Maritz Electrical might open an Eastern Cape office. “Our presence is growing,” he notes. “Depending on the amount of work we receive from the province, we might be looking at opening another office in the Eastern Cape.” Kumalo points out that Maritz Electrical’s expertise extends beyond lighting. “We do a variety of electrical works. We also offer project management, consulting, compliance and hazardous area classification and MV and LV maintenance.”

Western Cape The municipal authorities of Overstrand and Stellenbosch have contracted Maritz Electrical to work on low-cost housing projects. This is a big market and Maritz Electrical is building its skills set in this area. Aspects of this market include reticulation, electrification, street lights, road-side furniture and mini-substations. ■