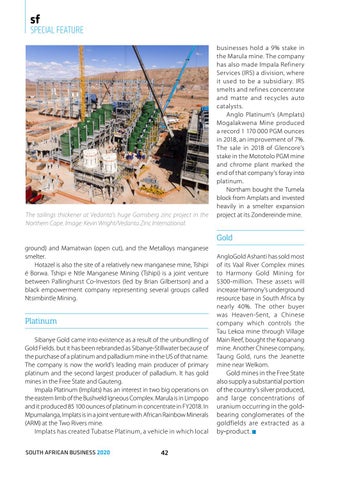 businesses hold a 9% stake in the Marula mine. The company has also made Impala Refinery Services (IRS) a division, where it used to be a subsidiary. IRS smelts and refines concentrate and matte and recycles auto catalysts. Anglo Platinum’s (Amplats) Mogalakwena Mine produced a record 1 170 000 PGM ounces in 2018, an improvement of 7%. The sale in 2018 of Glencore’s stake in the Mototolo PGM mine and chrome plant marked the end of that company’s foray into platinum. Northam bought the Tumela block from Amplats and invested heavily in a smelter expansion project at its Zondereinde mine.

Platinum Sibanye Gold came into existence as a result of the unbundling of Gold Fields. but it has been rebranded as Sibanye-Stillwater because of the purchase of a platinum and palladium mine in the US of that name. The company is now the world’s leading main producer of primary platinum and the second largest producer of palladium. It has gold mines in the Free State and Gauteng. Impala Platinum (Implats) has an interest in two big operations on the eastern limb of the Bushveld Igneous Complex. Marula is in Limpopo and it produced 85 100 ounces of platinum in concentrate in FY2018. In Mpumalanga, Implats is in a joint venture with African Rainbow Minerals (ARM) at the Two Rivers mine. Implats has created Tubatse Platinum, a vehicle in which local SOUTH AFRICAN BUSINESS 2020

AngloGold Ashanti has sold most of its Vaal River Complex mines to Harmony Gold Mining for $300-million. These assets will increase Harmony’s underground resource base in South Africa by nearly 40%. The other buyer was Heaven-Sent, a Chinese company which controls the Tau Lekoa mine through Village Main Reef, bought the Kopanang mine. Another Chinese company, Taung Gold, runs the Jeanette mine near Welkom. Gold mines in the Free State also supply a substantial portion of the country’s silver produced, and large concentrations of uranium occurring in the goldbearing conglomerates of the goldfields are extracted as a by-product.