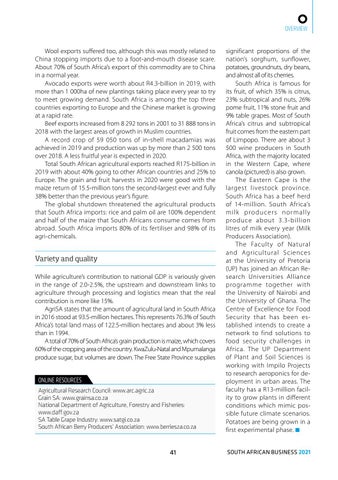 OVERVIEW Wool exports suffered too, although this was mostly related to China stopping imports due to a foot-and-mouth disease scare. About 70% of South Africa’s export of this commodity are to China in a normal year. Avocado exports were worth about R4.3-billion in 2019, with more than 1 000ha of new plantings taking place every year to try to meet growing demand. South Africa is among the top three countries exporting to Europe and the Chinese market is growing at a rapid rate. Beef exports increased from 8 292 tons in 2001 to 31 888 tons in 2018 with the largest areas of growth in Muslim countries. A record crop of 59 050 tons of in-shell macadamias was achieved in 2019 and production was up by more than 2 500 tons over 2018. A less fruitful year is expected in 2020. Total South African agricultural exports reached R175-billion in 2019 with about 40% going to other African countries and 25% to Europe. The grain and fruit harvests in 2020 were good with the maize return of 15.5-million tons the second-largest ever and fully 38% better than the previous year’s figure. The global shutdown threatened the agricultural products that South Africa imports: rice and palm oil are 100% dependent and half of the maize that South Africans consume comes from abroad. South Africa imports 80% of its fertiliser and 98% of its agri-chemicals.

Variety and quality While agriculture’s contribution to national GDP is variously given in the range of 2.0-2.5%, the upstream and downstream links to agriculture through processing and logistics mean that the real contribution is more like 15%. AgriSA states that the amount of agricultural land in South Africa in 2016 stood at 93.5-million hectares. This represents 76.3% of South Africa’s total land mass of 122.5-million hectares and about 3% less than in 1994. A total of 70% of South Africa’s grain production is maize, which covers 60% of the cropping area of the country. KwaZulu-Natal and Mpumalanga produce sugar, but volumes are down. The Free State Province supplies

significant proportions of the nation’s sorghum, sunflower, potatoes, groundnuts, dry beans, and almost all of its cherries. South Africa is famous for its fruit, of which 35% is citrus, 23% subtropical and nuts, 26% pome fruit, 11% stone fruit and 9% table grapes. Most of South Africa’s citrus and subtropical fruit comes from the eastern part of Limpopo. There are about 3 500 wine producers in South Africa, with the majority located in the Western Cape, where canola (pictured) is also grown. The Eastern Cape is the largest livestock province. South Africa has a beef herd of 14-million. South Africa’s m i l k p ro d u c e r s n o r m a l l y produce about 3.3-billion litres of milk every year (Milk Producers Association). The Faculty of Natural and Agricultural Sciences at the University of Pretoria (UP) has joined an African Research Universities Alliance programme together with the University of Nairobi and the University of Ghana. The Centre of Excellence for Food Security that has been established intends to create a network to find solutions to food security challenges in Africa. The UP Department of Plant and Soil Sciences is working with Impilo Projects to research aeroponics for deployment in urban areas. The faculty has a R13-million facility to grow plants in different conditions which mimic possible future climate scenarios. Potatoes are being grown in a first experimental phase. ■ SOUTH AFRICAN BUSINESS 2021