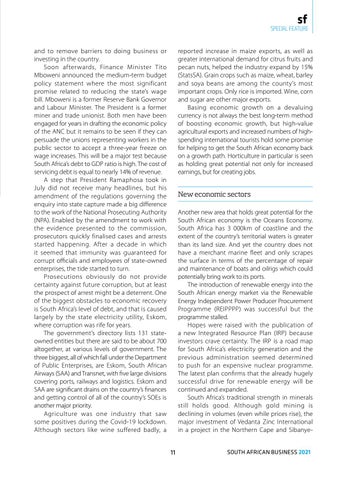 SPECIAL FEATURE and to remove barriers to doing business or investing in the country. Soon afterwards, Finance Minister Tito Mboweni announced the medium-term budget policy statement where the most significant promise related to reducing the state’s wage bill. Mboweni is a former Reserve Bank Governor and Labour Minister. The President is a former miner and trade unionist. Both men have been engaged for years in drafting the economic policy of the ANC but it remains to be seen if they can persuade the unions representing workers in the public sector to accept a three-year freeze on wage increases. This will be a major test because South Africa’s debt to GDP ratio is high. The cost of servicing debt is equal to nearly 14% of revenue. A step that President Ramaphosa took in July did not receive many headlines, but his amendment of the regulations governing the enquiry into state capture made a big difference to the work of the National Prosecuting Authority (NPA). Enabled by the amendment to work with the evidence presented to the commission, prosecutors quickly finalised cases and arrests started happening. After a decade in which it seemed that immunity was guaranteed for corrupt officials and employees of state-owned enterprises, the tide started to turn. Prosecutions obviously do not provide certainty against future corruption, but at least the prospect of arrest might be a deterrent. One of the biggest obstacles to economic recovery is South Africa’s level of debt, and that is caused largely by the state electricity utility, Eskom, where corruption was rife for years. The government’s directory lists 131 stateowned entities but there are said to be about 700 altogether, at various levels of government. The three biggest, all of which fall under the Department of Public Enterprises, are Eskom, South African Airways (SAA) and Transnet, with five large divisions covering ports, railways and logistics. Eskom and SAA are significant drains on the country’s finances and getting control of all of the country’s SOEs is another major priority. Agriculture was one industry that saw some positives during the Covid-19 lockdown. Although sectors like wine suffered badly, a

reported increase in maize exports, as well as greater international demand for citrus fruits and pecan nuts, helped the industry expand by 15% (StatsSA). Grain crops such as maize, wheat, barley and soya beans are among the county’s most important crops. Only rice is imported. Wine, corn and sugar are other major exports. Basing economic growth on a devaluing currency is not always the best long-term method of boosting economic growth, but high-value agricultural exports and increased numbers of highspending international tourists hold some promise for helping to get the South African economy back on a growth path. Horticulture in particular is seen as holding great potential not only for increased earnings, but for creating jobs.

New economic sectors Another new area that holds great potential for the South African economy is the Oceans Economy. South Africa has 3 000km of coastline and the extent of the country’s territorial waters is greater than its land size. And yet the country does not have a merchant marine fleet and only scrapes the surface in terms of the percentage of repair and maintenance of boats and oilrigs which could potentially bring work to its ports. The introduction of renewable energy into the South African energy market via the Renewable Energy Independent Power Producer Procurement Programme (REIPPPP) was successful but the programme stalled. Hopes were raised with the publication of a new Integrated Resource Plan (IRP) because investors crave certainty. The IRP is a road map for South Africa’s electricity generation and the previous administration seemed determined to push for an expensive nuclear programme. The latest plan confirms that the already hugely successful drive for renewable energy will be continued and expanded. South Africa’s traditional strength in minerals still holds good. Although gold mining is declining in volumes (even while prices rise), the major investment of Vedanta Zinc International in a project in the Northern Cape and Sibanye-