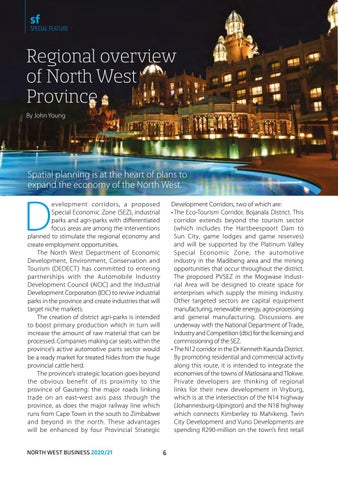 Spatial planning is at the heart of plans to expand the economy of the North West.

Development Corridors, two of which are: • The Eco-Tourism Corridor, Bojanala District. This corridor extends beyond the tourism sector (which includes the Hartbeespoort Dam to Sun City, game lodges and game reserves) and will be supported by the Platinum Valley Special Economic Zone, the automotive industry in the Madibeng area and the mining opportunities that occur throughout the district. The proposed PVSEZ in the Mogwase Industrial Area will be designed to create space for enterprises which supply the mining industry. Other targeted sectors are capital equipment manufacturing, renewable energy, agro-processing and general manufacturing. Discussions are underway with the National Department of Trade, Industry and Competition (dtic) for the licensing and commissioning of the SEZ. • The N12 corridor in the Dr Kenneth Kaunda District. By promoting residential and commercial activity along this route, it is intended to integrate the economies of the towns of Matlosana and Tlokwe. Private developers are thinking of regional links for their new development in Vryburg, which is at the intersection of the N14 highway (Johannesburg-Upington) and the N18 highway which connects Kimberley to Mahikeng. Twin City Development and Vuno Developments are spending R290-million on the town’s first retail

evelopment corridors, a proposed Special Economic Zone (SEZ), industrial parks and agri-parks with differentiated focus areas are among the interventions planned to stimulate the regional economy and create employment opportunities. The North West Department of Economic Development, Environment, Conservation and Tourism (DEDECT ) has committed to entering partnerships with the Automobile Industry Development Council (AIDC) and the Industrial Development Corporation (IDC) to revive industrial parks in the province and create industries that will target niche markets. The creation of district agri-parks is intended to boost primary production which in turn will increase the amount of raw material that can be processed. Companies making car seats within the province’s active automotive parts sector would be a ready market for treated hides from the huge provincial cattle herd. The province’s strategic location goes beyond the obvious benefit of its proximity to the province of Gauteng: the major roads linking trade on an east-west axis pass through the province, as does the major railway line which runs from Cape Town in the south to Zimbabwe and beyond in the north. These advantages will be enhanced by four Provincial Strategic