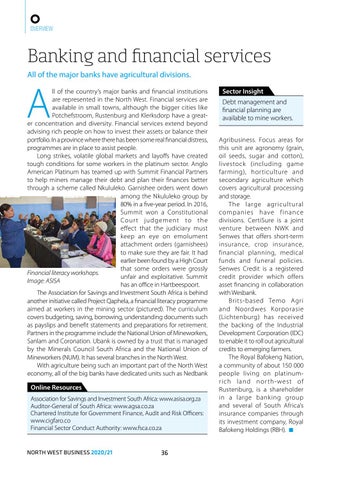 Banking and financial services All of the major banks have agricultural divisions.

ll of the countryâ&#x20AC;&#x2122;s major banks and financial institutions are represented in the North West. Financial services are available in small towns, although the bigger cities like Potchefstroom, Rustenburg and Klerksdorp have a greater concentration and diversity. Financial services extend beyond advising rich people on how to invest their assets or balance their portfolio. In a province where there has been some real financial distress, programmes are in place to assist people. Long strikes, volatile global markets and layoffs have created tough conditions for some workers in the platinum sector. Anglo American Platinum has teamed up with Summit Financial Partners to help miners manage their debt and plan their finances better through a scheme called Nkululeko. Garnishee orders went down among the Nkululeko group by 80% in a five-year period. In 2016, Summit won a Constitutional Cour t judgement to the effect that the judiciary must keep an eye on emolument attachment orders (garnishees) to make sure they are fair. It had earlier been found by a High Court that some orders were grossly Financial literacy workshops. unfair and exploitative. Summit Image: ASISA has an office in Hartbeespoort. The Association for Savings and Investment South Africa is behind another initiative called Project Qaphela, a financial literacy programme aimed at workers in the mining sector (pictured). The curriculum covers budgeting, saving, borrowing, understanding documents such as payslips and benefit statements and preparations for retirement. Partners in the programme include the National Union of Mineworkers, Sanlam and Coronation. Ubank is owned by a trust that is managed by the Minerals Council South Africa and the National Union of Mineworkers (NUM). It has several branches in the North West. With agriculture being such an important part of the North West economy, all of the big banks have dedicated units such as Nedbank

Sector Insight Debt management and financial planning are available to mine workers. Agribusiness. Focus areas for this unit are agronomy (grain, oil seeds, sugar and cotton), livestock (including game farming), horticulture and secondary agriculture which covers agricultural processing and storage. The large agricultural companies have finance divisions. CertiSure is a joint venture between NWK and Senwes that offers short-term insurance, crop insurance, financial planning, medical funds and funeral policies. Senwes Credit is a registered credit provider which offers asset financing in collaboration with Wesbank. Brits-based Temo Agri and Noordwes Korporasie (Lichtenburg) has received the backing of the Industrial Development Corporation (IDC) to enable it to roll out agricultural credits to emerging farmers. The Royal Bafokeng Nation, a community of about 150 000 people living on platinumr ich land nor th-west of Rustenburg, is a shareholder in a large banking group and several of South Africaâ&#x20AC;&#x2122;s insurance companies through its investment company, Royal Bafokeng Holdings (RBH). â&#x2013;