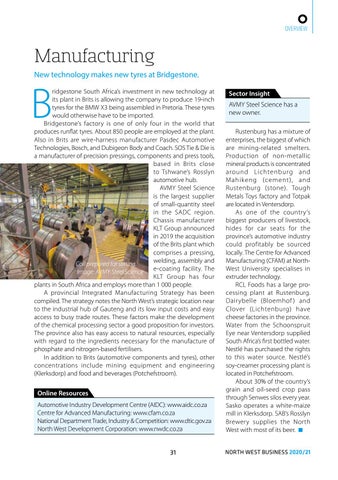 ridgestone South Africa’s investment in new technology at its plant in Brits is allowing the company to produce 19-inch tyres for the BMW X3 being assembled in Pretoria. These tyres would otherwise have to be imported. Bridgestone’s factory is one of only four in the world that produces runflat tyres. About 850 people are employed at the plant. Also in Brits are wire-harness manufacturer Pasdec Automotive Technologies, Bosch, and Dubigeon Body and Coach. SOS Tie & Die is a manufacturer of precision pressings, components and press tools, based in Brits close to Tshwane’s Rosslyn automotive hub. AVMY Steel Science is the largest supplier of small-quantity steel in the SADC region. Chassis manufacturer KLT Group announced in 2019 the acquisition of the Brits plant which comprises a pressing, welding, assembly and Coil prepared for slitting. e-coating facility. The Image: AVMY Steel Science KLT Group has four plants in South Africa and employs more than 1 000 people. A provincial Integrated Manufacturing Strategy has been compiled. The strategy notes the North West’s strategic location near to the industrial hub of Gauteng and its low input costs and easy access to busy trade routes. These factors make the development of the chemical processing sector a good proposition for investors. The province also has easy access to natural resources, especially with regard to the ingredients necessary for the manufacture of phosphate and nitrogen-based fertilisers. In addition to Brits (automotive components and tyres), other concentrations include mining equipment and engineering (Klerksdorp) and food and beverages (Potchefstroom).

Sector Insight AVMY Steel Science has a new owner. Rustenburg has a mixture of enterprises, the biggest of which are mining-related smelters. Production of non-metallic mineral products is concentrated around Lichtenburg and M ahik eng (cement), and Rustenburg (stone). Tough Metals Toys factory and Totpak are located in Ventersdorp. As one of the country’s biggest producers of livestock, hides for car seats for the province’s automotive industry could profitably be sourced locally. The Centre for Advanced Manufacturing (CFAM) at NorthWest University specialises in extruder technology. RCL Foods has a large processing plant at Rustenburg. Dairybelle (Bloemhof ) and Clover (Lichtenburg) have cheese factories in the province. Water from the Schoonspruit Eye near Ventersdorp supplied South Africa’s first bottled water. Nestlé has purchased the rights to this water source. Nestlé’s soy-creamer processing plant is located in Potchefstroom. About 30% of the country’s grain and oil-seed crop pass through Senwes silos every year. Sasko operates a white-maize mill in Klerksdorp. SAB’s Rosslyn Brewery supplies the North West with most of its beer. ■ NORTH WEST BUSINESS 2020/21