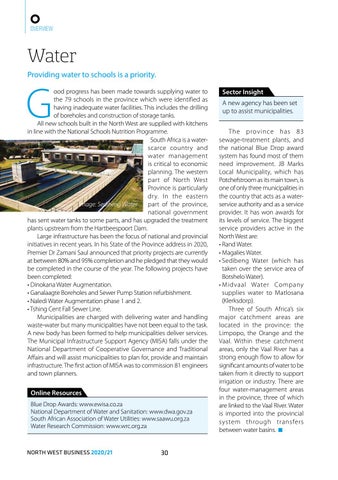 Water Providing water to schools is a priority.

ood progress has been made towards supplying water to the 79 schools in the province which were identified as having inadequate water facilities. This includes the drilling of boreholes and construction of storage tanks. All new schools built in the North West are supplied with kitchens in line with the National Schools Nutrition Programme. South Africa is a waterscarce country and water management is critical to economic planning. The western part of North West Province is particularly dry. In the eastern part of the province, Image: Sedibeng Water national government has sent water tanks to some parts, and has upgraded the treatment plants upstream from the Hartbeespoort Dam. Large infrastructure has been the focus of national and provincial initiatives in recent years. In his State of the Province address in 2020, Premier Dr Zamani Saul announced that priority projects are currently at between 80% and 95% completion and he pledged that they would be completed in the course of the year. The following projects have been completed: • Dinokana Water Augmentation. • Ganalaagte Boreholes and Sewer Pump Station refurbishment. • Naledi Water Augmentation phase 1 and 2. • Tshing Cent Fall Sewer Line. Municipalities are charged with delivering water and handling waste-water but many municipalities have not been equal to the task. A new body has been formed to help municipalities deliver services. The Municipal Infrastructure Support Agency (MISA) falls under the National Department of Cooperative Governance and Traditional Affairs and will assist municipalities to plan for, provide and maintain infrastructure. The first action of MISA was to commission 81 engineers and town planners.

Sector Insight A new agency has been set up to assist municipalities. The province has 83 sewage-treatment plants, and the national Blue Drop award system has found most of them need improvement. JB Marks Local Municipality, which has Potchefstroom as its main town, is one of only three municipalities in the country that acts as a waterservice authority and as a service provider. It has won awards for its levels of service. The biggest service providers active in the North West are: • Rand Water. • Magalies Water. • S edibeng Water (which has taken over the service area of Botshelo Water). • M idvaal Water Company supplies water to Matlosana (Klerksdorp). Three of South Africa’s six major catchment areas are located in the province: the Limpopo, the Orange and the Vaal. Within these catchment areas, only the Vaal River has a strong enough flow to allow for significant amounts of water to be taken from it directly to support irrigation or industry. There are four water-management areas in the province, three of which are linked to the Vaal River. Water is imported into the provincial system through transfers between water basins. ■