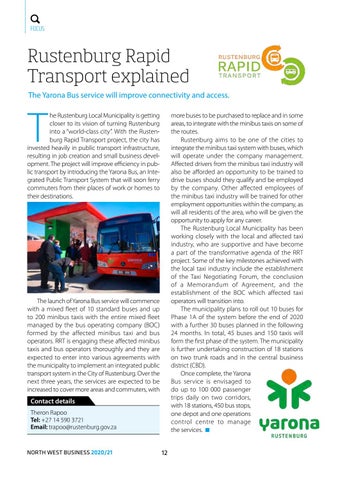 he Rustenburg Local Municipality is getting closer to its vision of turning Rustenburg into a “world-class city”. With the Rustenburg Rapid Transport project, the city has invested heavily in public transport infrastructure, resulting in job creation and small business development. The project will improve efficiency in public transport by introducing the Yarona Bus, an Integrated Public Transport System that will soon ferry commuters from their places of work or homes to their destinations.

more buses to be purchased to replace and in some areas, to integrate with the minibus taxis on some of the routes. Rustenburg aims to be one of the cities to integrate the minibus taxi system with buses, which will operate under the company management. Affected drivers from the minibus taxi industry will also be afforded an opportunity to be trained to drive buses should they qualify and be employed by the company. Other affected employees of the minibus taxi industry will be trained for other employment opportunities within the company, as will all residents of the area, who will be given the opportunity to apply for any career. The Rustenburg Local Municipality has been working closely with the local and affected taxi industry, who are supportive and have become a part of the transformative agenda of the RRT project. Some of the key milestones achieved with the local taxi industry include the establishment of the Taxi Negotiating Forum, the conclusion of a Memorandum of Agreement, and the establishment of the BOC which affected taxi operators will transition into. The municipality plans to roll out 10 buses for Phase 1A of the system before the end of 2020 with a further 30 buses planned in the following 24 months. In total, 45 buses and 150 taxis will form the first phase of the system. The municipality is further undertaking construction of 18 stations on two trunk roads and in the central business district (CBD). Once complete, the Yarona Bus service is envisaged to do up to 100 000 passenger trips daily on two corridors, with 18 stations, 450 bus stops, one depot and one operations control centre to manage the services. ■

The launch of Yarona Bus service will commence with a mixed fleet of 10 standard buses and up to 200 minibus taxis with the entire mixed fleet managed by the bus operating company (BOC) formed by the affected minibus taxi and bus operators. RRT is engaging these affected minibus taxis and bus operators thoroughly and they are expected to enter into various agreements with the municipality to implement an integrated public transport system in the City of Rustenburg. Over the next three years, the services are expected to be increased to cover more areas and commuters, with