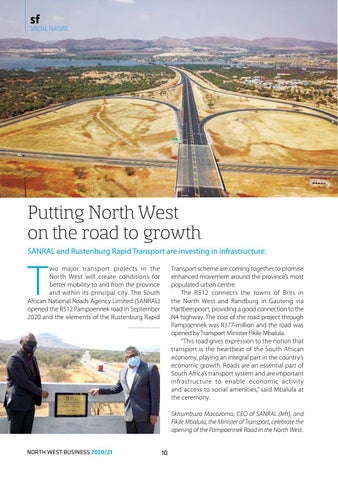 Putting North West on the road to growth SANRAL and Rustenburg Rapid Transport are investing in infrastructure.

Transport scheme are coming together to promise enhanced movement around the province’s most populated urban centre. The R512 connects the towns of Brits in the North West and Randburg in Gauteng via Hartbeespoort, providing a good connection to the N4 highway. The cost of the road project through Pampoennek was R377-million and the road was opened by Transport Minister Fikile Mbalula. “This road gives expression to the notion that transport is the heartbeat of the South African economy, playing an integral part in the country’s economic growth. Roads are an essential part of South Africa’s transport system and are important infrastructure to enable economic activity and access to social amenities,” said Mbalula at the ceremony.

wo major transport projects in the North West will create conditions for better mobility to and from the province and within its principal city. The South African National Roads Agency Limited (SANRAL) opened the R512 Pampoennek road in September 2020 and the elements of the Rustenburg Rapid

Skhumbuzo Macozoma, CEO of SANRAL (left), and Fikile Mbalula, the Minister of Transport, celebrate the opening of the Pampoennek Road in the North West. NORTH WEST BUSINESS 2020/21