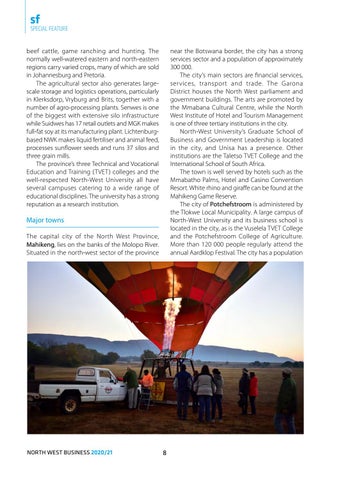 SPECIAL FEATURE near the Botswana border, the city has a strong services sector and a population of approximately 300 000. The city’s main sectors are financial services, services, transport and trade. The Garona District houses the North West parliament and government buildings. The arts are promoted by the Mmabana Cultural Centre, while the North West Institute of Hotel and Tourism Management is one of three tertiary institutions in the city. North-West University’s Graduate School of Business and Government Leadership is located in the city, and Unisa has a presence. Other institutions are the Taletso TVET College and the International School of South Africa. The town is well served by hotels such as the Mmabatho Palms, Hotel and Casino Convention Resort. White rhino and giraffe can be found at the Mahikeng Game Reserve. The city of Potchefstroom is administered by the Tlokwe Local Municipality. A large campus of North-West University and its business school is located in the city, as is the Vuselela TVET College and the Potchefstroom College of Agriculture. More than 120 000 people regularly attend the annual Aardklop Festival. The city has a population

beef cattle, game ranching and hunting. The normally well-watered eastern and north-eastern regions carry varied crops, many of which are sold in Johannesburg and Pretoria. The agricultural sector also generates largescale storage and logistics operations, particularly in Klerksdorp, Vryburg and Brits, together with a number of agro-processing plants. Senwes is one of the biggest with extensive silo infrastructure while Suidwes has 17 retail outlets and MGK makes full-fat soy at its manufacturing plant. Lichtenburgbased NWK makes liquid fertiliser and animal feed, processes sunflower seeds and runs 37 silos and three grain mills. The province’s three Technical and Vocational Education and Training (TVET) colleges and the well-respected North-West University all have several campuses catering to a wide range of educational disciplines. The university has a strong reputation as a research institution.

Major towns The capital city of the North West Province, Mahikeng, lies on the banks of the Molopo River. Situated in the north-west sector of the province