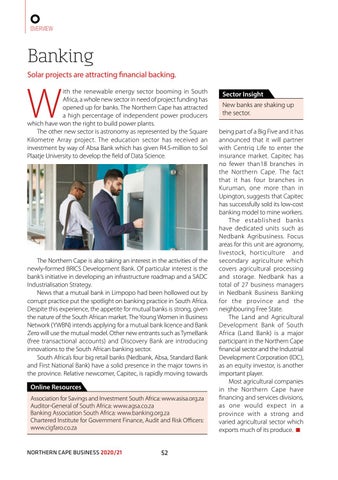 ith the renewable energy sector booming in South Africa, a whole new sector in need of project funding has opened up for banks. The Northern Cape has attracted a high percentage of independent power producers which have won the right to build power plants. The other new sector is astronomy as represented by the Square Kilometre Array project. The education sector has received an investment by way of Absa Bank which has given R4.5-million to Sol Plaatje University to develop the field of Data Science.

The Northern Cape is also taking an interest in the activities of the newly-formed BRICS Development Bank. Of particular interest is the bank’s initiative in developing an infrastructure roadmap and a SADC Industrialisation Strategy. News that a mutual bank in Limpopo had been hollowed out by corrupt practice put the spotlight on banking practice in South Africa. Despite this experience, the appetite for mutual banks is strong, given the nature of the South African market. The Young Women in Business Network (YWBN) intends applying for a mutual bank licence and Bank Zero will use the mutual model. Other new entrants such as TymeBank (free transactional accounts) and Discovery Bank are introducing innovations to the South African banking sector. South Africa’s four big retail banks (Nedbank, Absa, Standard Bank and First National Bank) have a solid presence in the major towns in the province. Relative newcomer, Capitec, is rapidly moving towards

Sector Insight New banks are shaking up the sector. being part of a Big Five and it has announced that it will partner with Centriq Life to enter the insurance market. Capitec has no fewer than18 branches in the Northern Cape. The fact that it has four branches in Kuruman, one more than in Upington, suggests that Capitec has successfully sold its low-cost banking model to mine workers. The established banks have dedicated units such as Nedbank Agribusiness. Focus areas for this unit are agronomy, livestock, horticulture and secondary agriculture which covers agricultural processing and storage. Nedbank has a total of 27 business managers in Nedbank Business Banking for the province and the neighbouring Free State. The Land and Agricultural Development Bank of South Africa (Land Bank) is a major participant in the Northern Cape financial sector and the Industrial Development Corporation (IDC), as an equity investor, is another important player. Most agricultural companies in the Northern Cape have financing and services divisions, as one would expect in a province with a strong and varied agricultural sector which exports much of its produce. ■