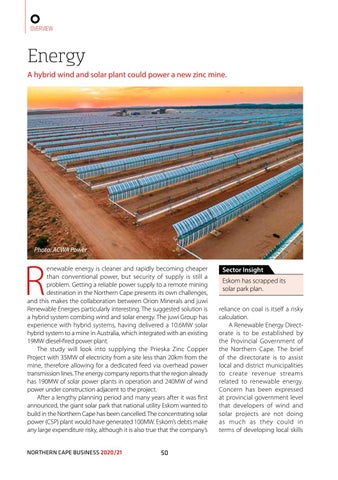 Energy A hybrid wind and solar plant could power a new zinc mine.

enewable energy is cleaner and rapidly becoming cheaper than conventional power, but security of supply is still a problem. Getting a reliable power supply to a remote mining destination in the Northern Cape presents its own challenges, and this makes the collaboration between Orion Minerals and juwi Renewable Energies particularly interesting. The suggested solution is a hybrid system combing wind and solar energy. The juwi Group has experience with hybrid systems, having delivered a 10.6MW solar hybrid system to a mine in Australia, which integrated with an existing 19MW diesel-fired power plant. The study will look into supplying the Prieska Zinc Copper Project with 35MW of electricity from a site less than 20km from the mine, therefore allowing for a dedicated feed via overhead power transmission lines. The energy company reports that the region already has 190MW of solar power plants in operation and 240MW of wind power under construction adjacent to the project. After a lengthy planning period and many years after it was first announced, the giant solar park that national utility Eskom wanted to build in the Northern Cape has been cancelled. The concentrating solar power (CSP) plant would have generated 100MW. Eskomâ&#x20AC;&#x2122;s debts make any large expenditure risky, although it is also true that the companyâ&#x20AC;&#x2122;s

Sector Insight Eskom has scrapped its solar park plan. reliance on coal is itself a risky calculation. A Renewable Energy Directorate is to be established by the Provincial Government of the Northern Cape. The brief of the directorate is to assist local and district municipalities to create revenue streams related to renewable energy. Concern has been expressed at provincial government level that developers of wind and solar projects are not doing as much as they could in terms of developing local skills