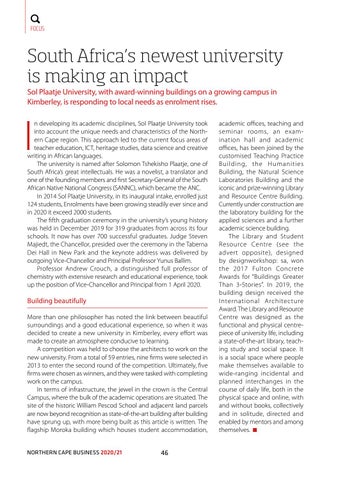 South Africa’s newest university is making an impact Sol Plaatje University, with award-winning buildings on a growing campus in Kimberley, is responding to local needs as enrolment rises.

n developing its academic disciplines, Sol Plaatje University took into account the unique needs and characteristics of the Northern Cape region. This approach led to the current focus areas of teacher education, ICT, heritage studies, data science and creative writing in African languages. The university is named after Solomon Tshekisho Plaatje, one of South Africa’s great intellectuals. He was a novelist, a translator and one of the founding members and first Secretary-General of the South African Native National Congress (SANNC), which became the ANC. In 2014 Sol Plaatje University, in its inaugural intake, enrolled just 124 students, Enrolments have been growing steadily ever since and in 2020 it exceed 2000 students. The fifth graduation ceremony in the university’s young history was held in December 2019 for 319 graduates from across its four schools. It now has over 700 successful graduates. Judge Steven Majiedt, the Chancellor, presided over the ceremony in the Taberna Dei Hall in New Park and the keynote address was delivered by outgoing Vice-Chancellor and Principal Professor Yunus Ballim. Professor Andrew Crouch, a distinguished full professor of chemistry with extensive research and educational experience, took up the position of Vice-Chancellor and Principal from 1 April 2020.

Building beautifully More than one philosopher has noted the link between beautiful surroundings and a good educational experience, so when it was decided to create a new university in Kimberley, every effort was made to create an atmosphere conducive to learning. A competition was held to choose the architects to work on the new university. From a total of 59 entries, nine firms were selected in 2013 to enter the second round of the competition. Ultimately, five firms were chosen as winners, and they were tasked with completing work on the campus. In terms of infrastructure, the jewel in the crown is the Central Campus, where the bulk of the academic operations are situated. The site of the historic William Pescod School and adjacent land parcels are now beyond recognition as state-of-the-art building after building have sprung up, with more being built as this article is written. The flagship Moroka building which houses student accommodation, NORTHERN CAPE BUSINESS 2020/21

academic offices, teaching and seminar rooms, an examination hall and academic offices, has been joined by the customised Teaching Practice Building, the Humanities Building, the Natural Science Laboratories Building and the iconic and prize-winning Library and Resource Centre Building. Currently under construction are the laboratory building for the applied sciences and a further academic science building. The Library and Student Resource Centre (see the advert opposite), designed by designworkshop: sa, won the 2017 Fulton Concrete Awards for “Buildings Greater Than 3-Stories”. In 2019, the building design received the International Architecture Award. The Library and Resource Centre was designed as the functional and physical centrepiece of university life, including a state-of-the-art library, teaching study and social space. It is a social space where people make themselves available to wide-ranging incidental and planned interchanges in the course of daily life, both in the physical space and online, with and without books, collectively and in solitude, directed and enabled by mentors and among themselves. ■