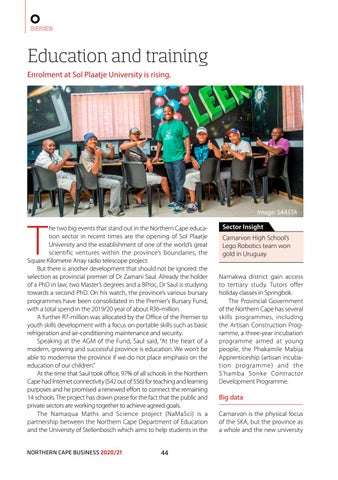 Education and training Enrolment at Sol Plaatje University is rising.

he two big events that stand out in the Northern Cape education sector in recent times are the opening of Sol Plaatje University and the establishment of one of the world’s great scientific ventures within the province’s boundaries, the Square Kilometre Array radio telescope project. But there is another development that should not be ignored: the selection as provincial premier of Dr Zamani Saul. Already the holder of a PhD in law, two Master’s degrees and a BProc, Dr Saul is studying towards a second PhD. On his watch, the province’s various bursary programmes have been consolidated in the Premier’s Bursary Fund, with a total spend in the 2019/20 year of about R36-million. A further R7-million was allocated by the Office of the Premier to youth skills development with a focus on portable skills such as basic refrigeration and air-conditioning maintenance and security. Speaking at the AGM of the Fund, Saul said, “At the heart of a modern, growing and successful province is education. We won’t be able to modernise the province if we do not place emphasis on the education of our children.” At the time that Saul took office, 97% of all schools in the Northern Cape had Internet connectivity (542 out of 556) for teaching and learning purposes and he promised a renewed effort to connect the remaining 14 schools. The project has drawn praise for the fact that the public and private sectors are working together to achieve agreed goals. The Namaqua Maths and Science project (NaMaSci) is a partnership between the Northern Cape Department of Education and the University of Stellenbosch which aims to help students in the NORTHERN CAPE BUSINESS 2020/21

Big data Carnarvon is the physical focus of the SKA, but the province as a whole and the new university