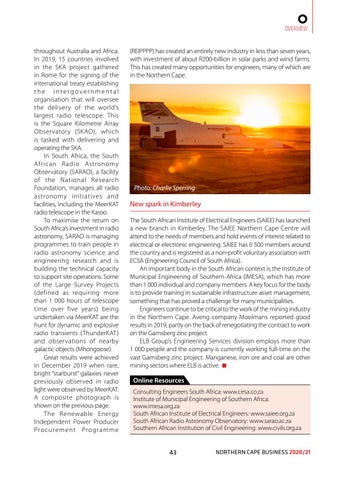 OVERVIEW throughout Australia and Africa. In 2019, 15 countries involved in the SKA project gathered in Rome for the signing of the international treaty establishing the intergovernmental organisation that will oversee the delivery of the world’s largest radio telescope. This is the Square Kilometre Array Observatory (SKAO), which is tasked with delivering and operating the SKA. In South Africa, the South African Radio Astronomy Observatory (SARAO), a facility of the National Research Foundation, manages all radio astronomy initiatives and facilities, including the MeerKAT radio telescope in the Karoo. To maximise the return on South Africa’s investment in radio astronomy, SARAO is managing programmes to train people in radio astronomy science and engineering research and is building the technical capacity to support site operations. Some of the Large Survey Projects (defined as requiring more than 1 000 hours of telescope time over five years) being undertaken via MeerKAT are the hunt for dynamic and explosive radio transients (ThunderKAT) and observations of nearby galactic objects (Mhongoose). Great results were achieved in December 2019 when rare, bright “starburst” galaxies never previously observed in radio light were observed by MeerKAT. A composite photograph is shown on the previous page. The Renewable Energy Independent Power Producer Pro c u re m e n t Pro gr a m m e

(REIPPPP) has created an entirely new industry in less than seven years, with investment of about R200-billion in solar parks and wind farms. This has created many opportunities for engineers, many of which are in the Northern Cape.

New spark in Kimberley The South African Institute of Electrical Engineers (SAIEE) has launched a new branch in Kimberley. The SAIEE Northern Cape Centre will attend to the needs of members and hold events of interest related to electrical or electronic engineering. SAIEE has 6 500 members around the country and is registered as a non-profit voluntary association with ECSA (Engineering Council of South Africa). An important body in the South African context is the Institute of Municipal Engineering of Southern Africa (IMESA), which has more than 1 000 individual and company members. A key focus for the body is to provide training in sustainable infrastructure asset management, something that has proved a challenge for many municipalities. Engineers continue to be critical to the work of the mining industry in the Northern Cape. Aveng company Moolmans reported good results in 2019, partly on the back of renegotiating the contract to work on the Gamsberg zinc project. ELB Group’s Engineering Services division employs more than 1 000 people and the company is currently working full-time on the vast Gamsberg zinc project. Manganese, iron ore and coal are other mining sectors where ELB is active. ■