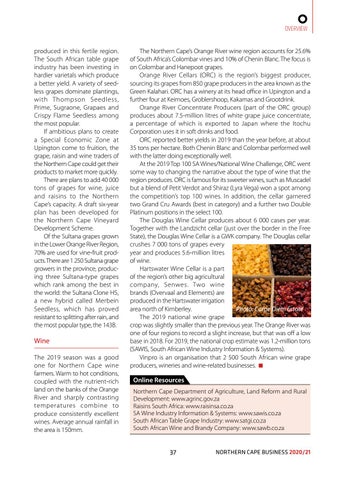 OVERVIEW produced in this fertile region. The South African table grape industry has been investing in hardier varietals which produce a better yield. A variety of seedless grapes dominate plantings, with Thompson Seedless, Prime, Sugraone, Grapaes and Crispy Flame Seedless among the most popular. If ambitious plans to create a Special Economic Zone at Upington come to fruition, the grape, raisin and wine traders of the Northern Cape could get their products to market more quickly. There are plans to add 40 000 tons of grapes for wine, juice and raisins to the Northern Cape’s capacity. A draft six-year plan has been developed for the Northern Cape Vineyard Development Scheme. Of the Sultana grapes grown in the Lower Orange River Region, 70% are used for vine-fruit products. There are 1 250 Sultana grape growers in the province, producing three Sultana-type grapes which rank among the best in the world: the Sultana Clone H5, a new hybrid called Merbein Seedless, which has proved resistant to splitting after rain, and the most popular type, the 143B.

Wine The 2019 season was a good one for Northern Cape wine farmers. Warm to hot conditions, coupled with the nutrient-rich land on the banks of the Orange River and sharply contrasting temperatures combine to produce consistently excellent wines. Average annual rainfall in the area is 150mm.

The Northern Cape’s Orange River wine region accounts for 25.6% of South Africa’s Colombar vines and 10% of Chenin Blanc. The focus is on Colombar and Hanepoot grapes. Orange River Cellars (ORC) is the region’s biggest producer, sourcing its grapes from 850 grape producers in the area known as the Green Kalahari. ORC has a winery at its head office in Upington and a further four at Keimoes, Groblershoop, Kakamas and Grootdrink. Orange River Concentrate Producers (part of the ORC group) produces about 7.5-million litres of white grape juice concentrate, a percentage of which is exported to Japan where the Itochu Corporation uses it in soft drinks and food. ORC reported better yields in 2019 than the year before, at about 35 tons per hectare. Both Chenin Blanc and Colombar performed well with the latter doing exceptionally well. At the 2019 Top 100 SA Wines/National Wine Challenge, ORC went some way to changing the narrative about the type of wine that the region produces. ORC is famous for its sweeter wines, such as Muscadel but a blend of Petit Verdot and Shiraz (Lyra Vega) won a spot among the competition’s top 100 wines. In addition, the cellar garnered two Grand Cru Awards (best in category) and a further two Double Platinum positions in the select 100. The Douglas Wine Cellar produces about 6 000 cases per year. Together with the Landzicht cellar (just over the border in the Free State), the Douglas Wine Cellar is a GWK company. The Douglas cellar crushes 7 000 tons of grapes every year and produces 5.6-million litres of wine. Hartswater Wine Cellar is a part of the region’s other big agricultural company, Senwes. Two wine brands (Overvaal and Elements) are produced in the Hartswater irrigation area north of Kimberley. Photo: Carpe Diem Estate The 2019 national wine grape crop was slightly smaller than the previous year. The Orange River was one of four regions to record a slight increase, but that was off a low base in 2018. For 2019, the national crop estimate was 1.2-million tons (SAWIS, South African Wine Industry Information & Systems). Vinpro is an organisation that 2 500 South African wine grape producers, wineries and wine-related businesses. ■