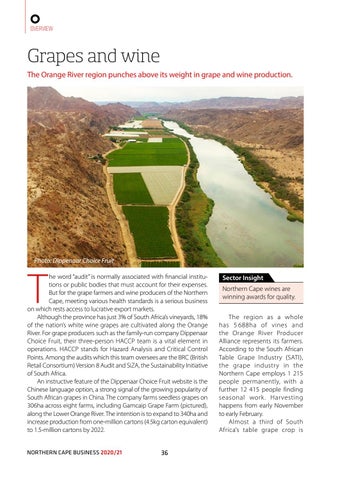 Grapes and wine The Orange River region punches above its weight in grape and wine production.

he word “audit” is normally associated with financial institutions or public bodies that must account for their expenses. But for the grape farmers and wine producers of the Northern Cape, meeting various health standards is a serious business on which rests access to lucrative export markets. Although the province has just 3% of South Africa’s vineyards, 18% of the nation’s white wine grapes are cultivated along the Orange River. For grape producers such as the family-run company Dippenaar Choice Fruit, their three-person HACCP team is a vital element in operations. HACCP stands for Hazard Analysis and Critical Control Points. Among the audits which this team oversees are the BRC (British Retail Consortium) Version 8 Audit and SiZA, the Sustainability Initiative of South Africa. An instructive feature of the Dippenaar Choice Fruit website is the Chinese language option, a strong signal of the growing popularity of South African grapes in China. The company farms seedless grapes on 306ha across eight farms, including Gamcaip Grape Farm (pictured), along the Lower Orange River. The intention is to expand to 340ha and increase production from one-million cartons (4.5kg carton equivalent) to 1.5-million cartons by 2022. NORTHERN CAPE BUSINESS 2020/21

Sector Insight Northern Cape wines are winning awards for quality. The region as a whole has 5 688ha of vines and the Orange River Producer Alliance represents its farmers. According to the South African Table Grape Industry (SATI), the grape industry in the Northern Cape employs 1 215 people permanently, with a further 12 415 people finding seasonal work. Harvesting happens from early November to early February. Almost a third of South Africa’s table grape crop is