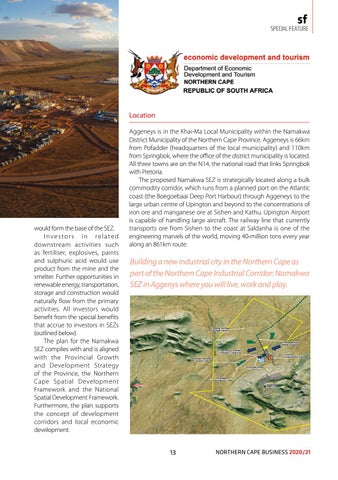 Development in the Norther SPECIAL FEATURE

would form the base of the SEZ. Investors in related downstream activities such as fertiliser, explosives, paints and sulphuric acid would use product from the mine and the smelter. Further opportunities in renewable energy, transportation, storage and construction would naturally flow from the primary activities. All investors would benefit from the special benefits that accrue to investors in SEZs (outlined below). The plan for the Namakwa SEZ complies with and is aligned with the Provincial Growth and Development Strategy of the Province, the Northern Cape Spatial Development Framework and the National Spatial Development Framework. Furthermore, the plan supports the concept of development corridors and local economic development.

Aggeneys is in the Khai-Ma Local Municipality within the Namakwa District Municipality of the Northern Cape Province. Aggeneys is 66km from Pofadder (headquarters of the local municipality) and 110km from Springbok, where the office of the district municipality is located. All three towns are on the N14, the national road that links Springbok with Pretoria. The proposed Namakwa SEZ is strategically located along a bulk commodity corridor, which runs from a planned port on the Atlantic coast (the Boegoebaai Deep Port Harbour) through Aggeneys to the large urban centre of Upington and beyond to the concentrations of iron ore and manganese ore at Sishen and Kathu. Upington Airport is capable of handling large aircraft. The railway line that currently transports ore from Sishen to the coast at Saldanha is one of the engineering marvels of the world, moving 40-million tons every year along an 861km route.