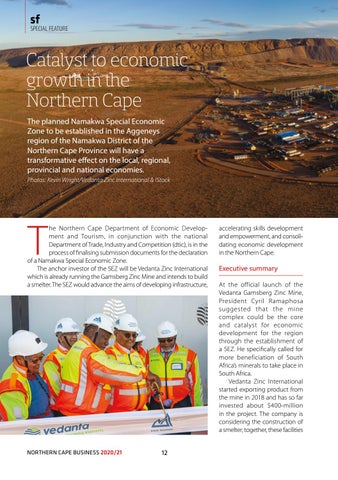 Catalyst to economic growth in the Northern Cape The planned Namakwa Special Economic Zone to be established in the Aggeneys region of the Namakwa District of the Northern Cape Province will have a transformative effect on the local, regional, provincial and national economies. Photos: Kevin Wright/Vedanta Zinc International & iStock

he Northern Cape Department of Economic Development and Tourism, in conjunction with the national Department of Trade, Industry and Competition (dtic), is in the process of finalising submission documents for the declaration of a Namakwa Special Economic Zone. The anchor investor of the SEZ will be Vedanta Zinc International which is already running the Gamsberg Zinc Mine and intends to build a smelter. The SEZ would advance the aims of developing infrastructure,

accelerating skills development and empowerment, and consolidating economic development in the Northern Cape.

Executive summary At the official launch of the Vedanta Gamsberg Zinc Mine, President Cyril Ramaphosa suggested that the mine complex could be the core and catalyst for economic development for the region through the establishment of a SEZ. He specifically called for more beneficiation of South Africaâ&#x20AC;&#x2122;s minerals to take place in South Africa. Vedanta Zinc International started exporting product from the mine in 2018 and has so far invested about $400-million in the project. The company is considering the construction of a smelter; together, these facilities