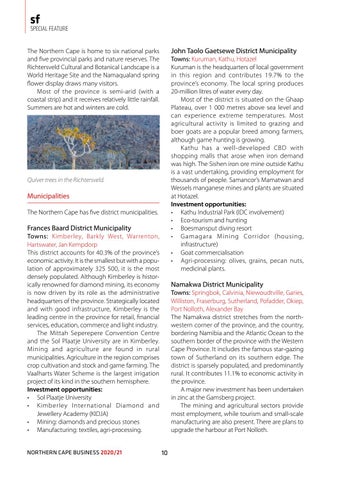 The Northern Cape is home to six national parks and five provincial parks and nature reserves. The Richtersveld Cultural and Botanical Landscape is a World Heritage Site and the Namaqualand spring flower display draws many visitors. Most of the province is semi-arid (with a coastal strip) and it receives relatively little rainfall. Summers are hot and winters are cold.

Towns: Kuruman, Kathu, Hotazel Kuruman is the headquarters of local government in this region and contributes 19.7% to the province’s economy. The local spring produces 20-million litres of water every day. Most of the district is situated on the Ghaap Plateau, over 1 000 metres above sea level and can experience extreme temperatures. Most agricultural activity is limited to grazing and boer goats are a popular breed among farmers, although game hunting is growing. Kathu has a well-developed CBD with shopping malls that arose when iron demand was high. The Sishen iron ore mine outside Kathu is a vast undertaking, providing employment for thousands of people. Samancor’s Mamatwan and Wessels manganese mines and plants are situated at Hotazel. Investment opportunities: • Kathu Industrial Park (IDC involvement) • Eco-tourism and hunting • Boesmansput diving resort •  Gamagara Mining Corridor (housing, infrastructure) • Goat commercialisation • Agri-processing: olives, grains, pecan nuts, medicinal plants.

Quiver trees in the Richtersveld.

Towns: Kimberley, Barkly West, Warrenton, Hartswater, Jan Kempdorp This district accounts for 40.3% of the province’s economic activity. It is the smallest but with a population of approximately 325 500, it is the most densely populated. Although Kimberley is historically renowned for diamond mining, its economy is now driven by its role as the administrative headquarters of the province. Strategically located and with good infrastructure, Kimberley is the leading centre in the province for retail, financial services, education, commerce and light industry. The Mittah Seperepere Convention Centre and the Sol Plaatje University are in Kimberley. Mining and agriculture are found in rural municipalities. Agriculture in the region comprises crop cultivation and stock and game farming. The Vaalharts Water Scheme is the largest irrigation project of its kind in the southern hemisphere. Investment opportunities: • Sol Plaatje University •  Kimberley International Diamond and Jewellery Academy (KIDJA) • Mining: diamonds and precious stones • Manufacturing: textiles, agri-processing. NORTHERN CAPE BUSINESS 2020/21

Towns: Springbok, Calvinia, Niewoudtville, Garies, Williston, Fraserburg, Sutherland, Pofadder, Okiep, Port Nolloth, Alexander Bay The Namakwa district stretches from the northwestern corner of the province, and the country, bordering Namibia and the Atlantic Ocean to the southern border of the province with the Western Cape Province. It includes the famous star-gazing town of Sutherland on its southern edge. The district is sparsely populated, and predominantly rural. It contributes 11.1% to economic activity in the province. A major new investment has been undertaken in zinc at the Gamsberg project. The mining and agricultural sectors provide most employment, while tourism and small-scale manufacturing are also present. There are plans to upgrade the harbour at Port Nolloth.