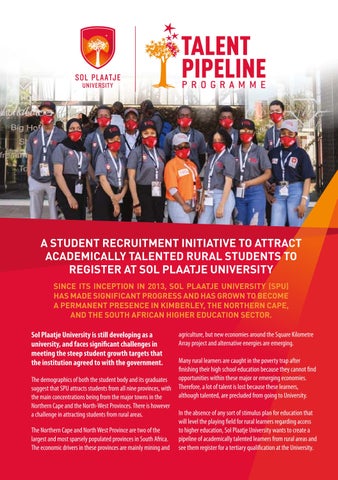 A STUDENT RECRUITMENT INITIATIVE TO ATTRACT ACADEMICALLY TALENTED RURAL STUDENTS TO REGISTER AT SOL PLAATJE UNIVERSITY SINCE ITS INCEPTION IN 2013, SOL PLAATJE UNIVERSITY (SPU) HAS MADE SIGNIFICANT PROGRESS AND HAS GROWN TO BECOME A PERMANENT PRESENCE IN KIMBERLEY, THE NORTHERN CAPE, AND THE SOUTH AFRICAN HIGHER EDUCATION SECTOR.

Sol Plaatje University is still developing as a university, and faces significant challenges in meeting the steep student growth targets that the institution agreed to with the government. The demographics of both the student body and its graduates suggest that SPU attracts students from all nine provinces, with the main concentrations being from the major towns in the Northern Cape and the North-West Provinces. There is however a challenge in attracting students from rural areas. The Northern Cape and North West Province are two of the largest and most sparsely populated provinces in South Africa. The economic drivers in these provinces are mainly mining and

agriculture, but new economies around the Square Kilometre Array project and alternative energies are emerging. Many rural learners are caught in the poverty trap after finishing their high school education because they cannot find opportunities within these major or emerging economies. Therefore, a lot of talent is lost because these learners, although talented, are precluded from going to University. In the absence of any sort of stimulus plan for education that will level the playing field for rural learners regarding access to higher education, Sol Plaatje University wants to create a pipeline of academically talented learners from rural areas and see them register for a tertiary qualification at the University.