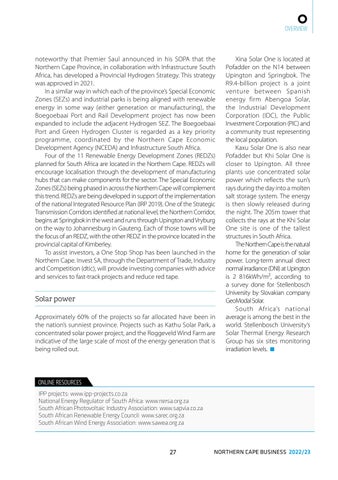 noteworthy that Premier Saul announced in his SOPA that the Northern Cape Province, in collaboration with Infrastructure South Africa, has developed a Provincial Hydrogen Strategy. This strategy was approved in 2021. In a similar way in which each of the province’s Special Economic Zones (SEZs) and industrial parks is being aligned with renewable energy in some way (either generation or manufacturing), the Boegoebaai Port and Rail Development project has now been expanded to include the adjacent Hydrogen SEZ. The Boegoebaai Port and Green Hydrogen Cluster is regarded as a key priority programme, coordinated by the Northern Cape Economic Development Agency (NCEDA) and Infrastructure South Africa. Four of the 11 Renewable Energy Development Zones (REDZs) planned for South Africa are located in the Northern Cape. REDZs will encourage localisation through the development of manufacturing hubs that can make components for the sector. The Special Economic Zones (SEZs) being phased in across the Northern Cape will complement this trend. REDZs are being developed in support of the implementation of the national Integrated Resource Plan (IRP 2019). One of the Strategic Transmission Corridors identified at national level, the Northern Corridor, begins at Springbok in the west and runs through Upington and Vryburg on the way to Johannesburg in Gauteng. Each of those towns will be the focus of an REDZ, with the other REDZ in the province located in the provincial capital of Kimberley. To assist investors, a One Stop Shop has been launched in the Northern Cape. Invest SA, through the Department of Trade, Industry and Competition (dtic), will provide investing companies with advice and services to fast-track projects and reduce red tape.

Solar power Approximately 60% of the projects so far allocated have been in the nation’s sunniest province. Projects such as Kathu Solar Park, a concentrated solar power project, and the Roggeveld Wind Farm are indicative of the large scale of most of the energy generation that is being rolled out.

Xina Solar One is located at Pofadder on the N14 between Upington and Springbok. The R9.4-billion project is a joint venture between Spanish energy firm Abengoa Solar, the Industrial Development Corporation (IDC), the Public Investment Corporation (PIC) and a community trust representing the local population. Kaxu Solar One is also near Pofadder but Khi Solar One is closer to Upington. All three plants use concentrated solar power which reflects the sun’s rays during the day into a molten salt storage system. The energy is then slowly released during the night. The 205m tower that collects the rays at the Khi Solar One site is one of the tallest structures in South Africa. The Northern Cape is the natural home for the generation of solar power. Long-term annual direct normal irradiance (DNI) at Upington is 2 816kWh/m2, according to a survey done for Stellenbosch University by Slovakian company GeoModal Solar. South Africa’s national average is among the best in the world. Stellenbosch University’s Solar Thermal Energy Research Group has six sites monitoring irradiation levels. ■