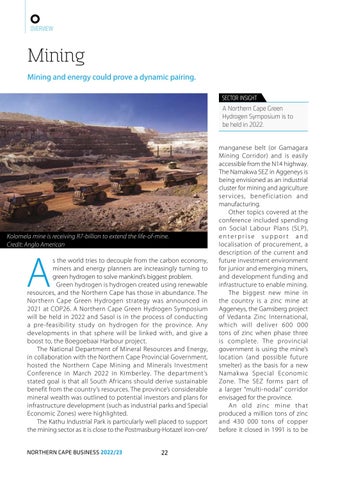 Mining Mining and energy could prove a dynamic pairing. SECTOR INSIGHT A Northern Cape Green Hydrogen Symposium is to be held in 2022.

Kolomela mine is receiving R7-billion to extend the life-of-mine. Credit: Anglo American

s the world tries to decouple from the carbon economy, miners and energy planners are increasingly turning to green hydrogen to solve mankind’s biggest problem. Green hydrogen is hydrogen created using renewable resources, and the Northern Cape has those in abundance. The Northern Cape Green Hydrogen strategy was announced in 2021 at COP26. A Northern Cape Green Hydrogen Symposium will be held in 2022 and Sasol is in the process of conducting a pre-feasibility study on hydrogen for the province. Any developments in that sphere will be linked with, and give a boost to, the Boegoebaai Harbour project. The National Department of Mineral Resources and Energy, in collaboration with the Northern Cape Provincial Government, hosted the Northern Cape Mining and Minerals Investment Conference in March 2022 in Kimberley. The department’s stated goal is that all South Africans should derive sustainable benefit from the country’s resources. The province’s considerable mineral wealth was outlined to potential investors and plans for infrastructure development (such as industrial parks and Special Economic Zones) were highlighted. The Kathu Industrial Park is particularly well placed to support the mining sector as it is close to the Postmasburg-Hotazel iron-ore/

manganese belt (or Gamagara Mining Corridor) and is easily accessible from the N14 highway. The Namakwa SEZ in Aggeneys is being envisioned as an industrial cluster for mining and agriculture ser vices, beneficiation and manufacturing. Other topics covered at the conference included spending on Social Labour Plans (SLP), enterprise support and localisation of procurement, a description of the current and future investment environment for junior and emerging miners, and development funding and infrastructure to enable mining. The biggest new mine in the country is a zinc mine at Aggeneys, the Gamsberg project of Vedanta Zinc International, which will deliver 600 000 tons of zinc when phase three is complete. The provincial government is using the mine’s location (and possible future smelter) as the basis for a new Namakwa Special Economic Zone. The SEZ forms part of a larger “multi-nodal” corridor envisaged for the province. An old zinc mine that produced a million tons of zinc and 430 000 tons of copper before it closed in 1991 is to be