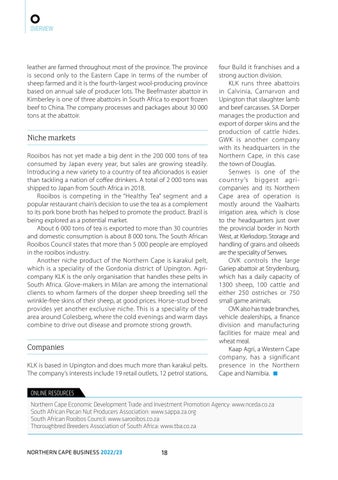 leather are farmed throughout most of the province. The province is second only to the Eastern Cape in terms of the number of sheep farmed and it is the fourth-largest wool-producing province based on annual sale of producer lots. The Beefmaster abattoir in Kimberley is one of three abattoirs in South Africa to export frozen beef to China. The company processes and packages about 30 000 tons at the abattoir.

Niche markets Rooibos has not yet made a big dent in the 200 000 tons of tea consumed by Japan every year, but sales are growing steadily. Introducing a new variety to a country of tea aficionados is easier than tackling a nation of coffee drinkers. A total of 2 000 tons was shipped to Japan from South Africa in 2018. Rooibos is competing in the “Healthy Tea” segment and a popular restaurant chain’s decision to use the tea as a complement to its pork bone broth has helped to promote the product. Brazil is being explored as a potential market. About 6 000 tons of tea is exported to more than 30 countries and domestic consumption is about 8 000 tons. The South African Rooibos Council states that more than 5 000 people are employed in the rooibos industry. Another niche product of the Northern Cape is karakul pelt, which is a speciality of the Gordonia district of Upington. Agricompany KLK is the only organisation that handles these pelts in South Africa. Glove-makers in Milan are among the international clients to whom farmers of the dorper sheep breeding sell the wrinkle-free skins of their sheep, at good prices. Horse-stud breed provides yet another exclusive niche. This is a speciality of the area around Colesberg, where the cold evenings and warm days combine to drive out disease and promote strong growth.

Companies KLK is based in Upington and does much more than karakul pelts. The company’s interests include 19 retail outlets, 12 petrol stations,

four Build it franchises and a strong auction division. KLK runs three abattoirs in Calvinia, Carnarvon and Upington that slaughter lamb and beef carcasses. SA Dorper manages the production and export of dorper skins and the production of cattle hides. GWK is another company with its headquarters in the Northern Cape, in this case the town of Douglas. Senwes is one of the countr y ’s biggest agricompanies and its Northern Cape area of operation is mostly around the Vaalharts irrigation area, which is close to the headquarters just over the provincial border in North West, at Klerksdorp. Storage and handling of grains and oilseeds are the speciality of Senwes. OVK controls the large Gariep abattoir at Strydenburg, which has a daily capacity of 1300 sheep, 100 cattle and either 250 ostriches or 750 small game animals. OVK also has trade branches, vehicle dealerships, a finance division and manufacturing facilities for maize meal and wheat meal. Kaap Agri, a Western Cape company, has a significant presence in the Northern Cape and Namibia. ■