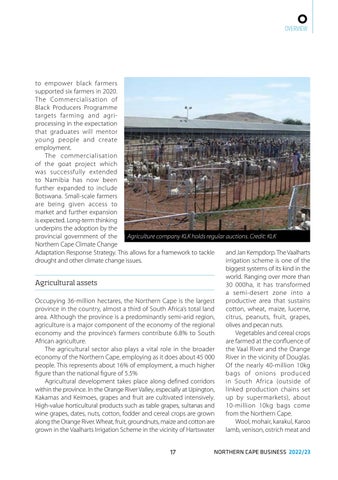 to empower black farmers supported six farmers in 2020. The Commercialisation of Black Producers Programme targets farming and agriprocessing in the expectation that graduates will mentor young people and create employment. The commercialisation of the goat project which was successfully extended to Namibia has now been further expanded to include Botswana. Small-scale farmers are being given access to market and further expansion is expected. Long-term thinking underpins the adoption by the Agriculture company KLK holds regular auctions. Credit: KLK provincial government of the Northern Cape Climate Change Adaptation Response Strategy. This allows for a framework to tackle and Jan Kempdorp. The Vaalharts drought and other climate change issues. irrigation scheme is one of the biggest systems of its kind in the world. Ranging over more than Agricultural assets 30 000ha, it has transformed a semi-desert zone into a productive area that sustains Occupying 36-million hectares, the Northern Cape is the largest cotton, wheat, maize, lucerne, province in the country, almost a third of South Africa’s total land citrus, peanuts, fruit, grapes, area. Although the province is a predominantly semi-arid region, olives and pecan nuts. agriculture is a major component of the economy of the regional Vegetables and cereal crops economy and the province’s farmers contribute 6.8% to South are farmed at the confluence of African agriculture. the Vaal River and the Orange The agricultural sector also plays a vital role in the broader River in the vicinity of Douglas. economy of the Northern Cape, employing as it does about 45 000 Of the nearly 40-million 10kg people. This represents about 16% of employment, a much higher bags of onions produced figure than the national figure of 5.5% in South Africa (outside of Agricultural development takes place along defined corridors linked production chains set within the province. In the Orange River Valley, especially at Upington, up by supermarkets), about Kakamas and Keimoes, grapes and fruit are cultivated intensively. 10-million 10kg bags come High-value horticultural products such as table grapes, sultanas and from the Northern Cape. wine grapes, dates, nuts, cotton, fodder and cereal crops are grown Wool, mohair, karakul, Karoo along the Orange River. Wheat, fruit, groundnuts, maize and cotton are lamb, venison, ostrich meat and grown in the Vaalharts Irrigation Scheme in the vicinity of Hartswater