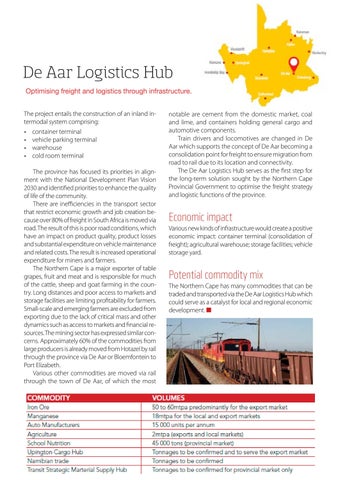 De Aar Logistics Hub Optimising freight and logistics through infrastructure. The project entails the construction of an inland intermodal system comprising: • container terminal • vehicle parking terminal • warehouse • cold room terminal The province has focused its priorities in alignment with the National Development Plan Vision 2030 and identified priorities to enhance the quality of life of the community. There are inefficiencies in the transport sector that restrict economic growth and job creation because over 80% of freight in South Africa is moved via road. The result of this is poor road conditions, which have an impact on product quality, product losses and substantial expenditure on vehicle maintenance and related costs. The result is increased operational expenditure for miners and farmers. The Northern Cape is a major exporter of table grapes, fruit and meat and is responsible for much of the cattle, sheep and goat farming in the country. Long distances and poor access to markets and storage facilities are limiting profitability for farmers. Small-scale and emerging farmers are excluded from exporting due to the lack of critical mass and other dynamics such as access to markets and financial resources. The mining sector has expressed similar concerns. Approximately 60% of the commodities from large producers is already moved from Hotazel by rail through the province via De Aar or Bloemfontein to Port Elizabeth. Various other commodities are moved via rail through the town of De Aar, of which the most

notable are cement from the domestic market, coal and lime, and containers holding general cargo and automotive components. Train drivers and locomotives are changed in De Aar which supports the concept of De Aar becoming a consolidation point for freight to ensure migration from road to rail due to its location and connectivity. The De Aar Logistics Hub serves as the first step for the long-term solution sought by the Northern Cape Provincial Government to optimise the freight strategy and logistic functions of the province.

Potential commodity mix The Northern Cape has many commodities that can be traded and transported via the De Aar Logistics Hub which could serve as a catalyst for local and regional economic development. ■