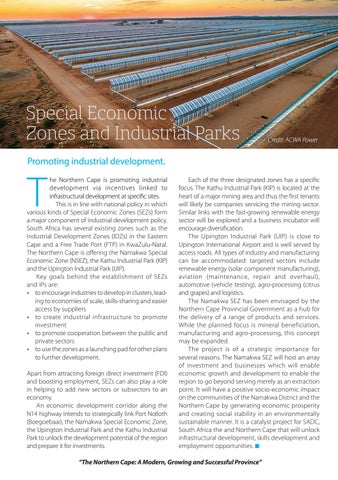 he Northern Cape is promoting industrial development via incentives linked to infrastructural development at specific sites. This is in line with national policy in which various kinds of Special Economic Zones (SEZs) form a major component of industrial development policy. South Africa has several existing zones such as the Industrial Development Zones (IDZs) in the Eastern Cape and a Free Trade Port (FTP) in KwaZulu-Natal. The Northern Cape is offering the Namakwa Special Economic Zone (NSEZ), the Kathu Industrial Park (KIP) and the Upington Industrial Park (UIP). Key goals behind the establishment of SEZs and IPs are: • to encourage industries to develop in clusters, leading to economies of scale, skills-sharing and easier access by suppliers • to create industrial infrastructure to promote investment • to promote cooperation between the public and private sectors • to use the zones as a launching pad for other plans to further development. Apart from attracting foreign direct investment (FDI) and boosting employment, SEZs can also play a role in helping to add new sectors or subsectors to an economy. An economic development corridor along the N14 highway intends to strategically link Port Nolloth (Boegoebaai), the Namakwa Special Economic Zone, the Upington Industrial Park and the Kathu Industrial Park to unlock the development potential of the region and prepare it for investments.

Each of the three designated zones has a specific focus. The Kathu Industrial Park (KIP) is located at the heart of a major mining area and thus the first tenants will likely be companies servicing the mining sector. Similar links with the fast-growing renewable energy sector will be explored and a business incubator will encourage diversification. The Upington Industrial Park (UIP) is close to Upington International Airport and is well served by access roads. All types of industry and manufacturing can be accommodated: targeted sectors include renewable energy (solar component manufacturing), aviation (maintenance, repair and overhaul), automotive (vehicle testing), agro-processing (citrus and grapes) and logistics. The Namakwa SEZ has been envisaged by the Northern Cape Provincial Government as a hub for the delivery of a range of products and services. While the planned focus is mineral beneficiation, manufacturing and agro-processing, this concept may be expanded. The project is of a strategic importance for several reasons. The Namakwa SEZ will host an array of investment and businesses which will enable economic growth and development to enable the region to go beyond serving merely as an extraction point. It will have a positive socio-economic impact on the communities of the Namakwa District and the Northern Cape by generating economic prosperity and creating social stability in an environmentally sustainable manner. It is a catalyst project for SADC, South Africa the and Northern Cape that will unlock infrastructural development, skills development and employment opportunities. ■

“The Northern Cape: A Modern, Growing and Successful Province”