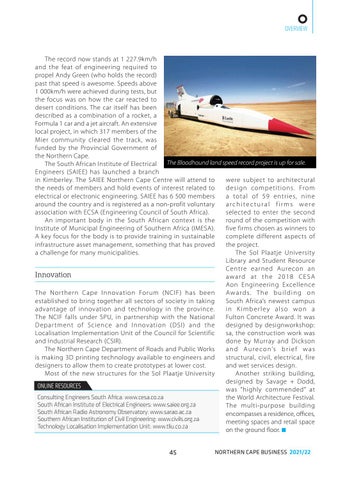 The record now stands at 1 227.9km/h and the feat of engineering required to propel Andy Green (who holds the record) past that speed is awesome. Speeds above 1 000km/h were achieved during tests, but the focus was on how the car reacted to desert conditions. The car itself has been described as a combination of a rocket, a Formula 1 car and a jet aircraft. An extensive local project, in which 317 members of the Mier community cleared the track, was funded by the Provincial Government of the Northern Cape. The Bloodhound land speed record project is up for sale. The South African Institute of Electrical Engineers (SAIEE) has launched a branch were subject to architectural in Kimberley. The SAIEE Northern Cape Centre will attend to design competitions. From the needs of members and hold events of interest related to a total of 59 entries, nine electrical or electronic engineering. SAIEE has 6 500 members architectural firms were around the country and is registered as a non-profit voluntary selected to enter the second association with ECSA (Engineering Council of South Africa). round of the competition with An important body in the South African context is the five firms chosen as winners to Institute of Municipal Engineering of Southern Africa (IMESA). complete different aspects of A key focus for the body is to provide training in sustainable the project. infrastructure asset management, something that has proved The Sol Plaatje University a challenge for many municipalities. Library and Student Resource Centre earned Aurecon an Innovation award at the 2018 CESA Aon Engineering Excellence Awards. The building on The Nor thern Cape Innovation Forum (NCIF) has been South Africa’s newest campus established to bring together all sectors of society in taking in Kimberley also won a advantage of innovation and technology in the province. Fulton Concrete Award. It was The NCIF falls under SPU, in partnership with the National designed by designworkshop: Depar tment of Science and I nnovation (DSI) and the sa, the construction work was Localisation Implementation Unit of the Council for Scientific done by Murray and Dickson and Industrial Research (CSIR). a n d A u r e c o n’s b r i e f w a s The Northern Cape Department of Roads and Public Works structural, civil, electrical, fire is making 3D printing technology available to engineers and and wet services design. designers to allow them to create prototypes at lower cost. Another striking building, Most of the new structures for the Sol Plaatje University designed by Savage + Dodd, ONLINE RESOURCES was “highly commended” at Consulting Engineers South Africa: www.cesa.co.za the World Architecture Festival. South African Institute of Electrical Engineers: www.saiee.org.za The multi-purpose building South African Radio Astronomy Observatory: www.sarao.ac.za encompasses a residence, offices, Southern African Institution of Civil Engineering: www.civils.org.za meeting spaces and retail space Technology Localisation Implementation Unit: www.tliu.co.za on the ground floor. ■